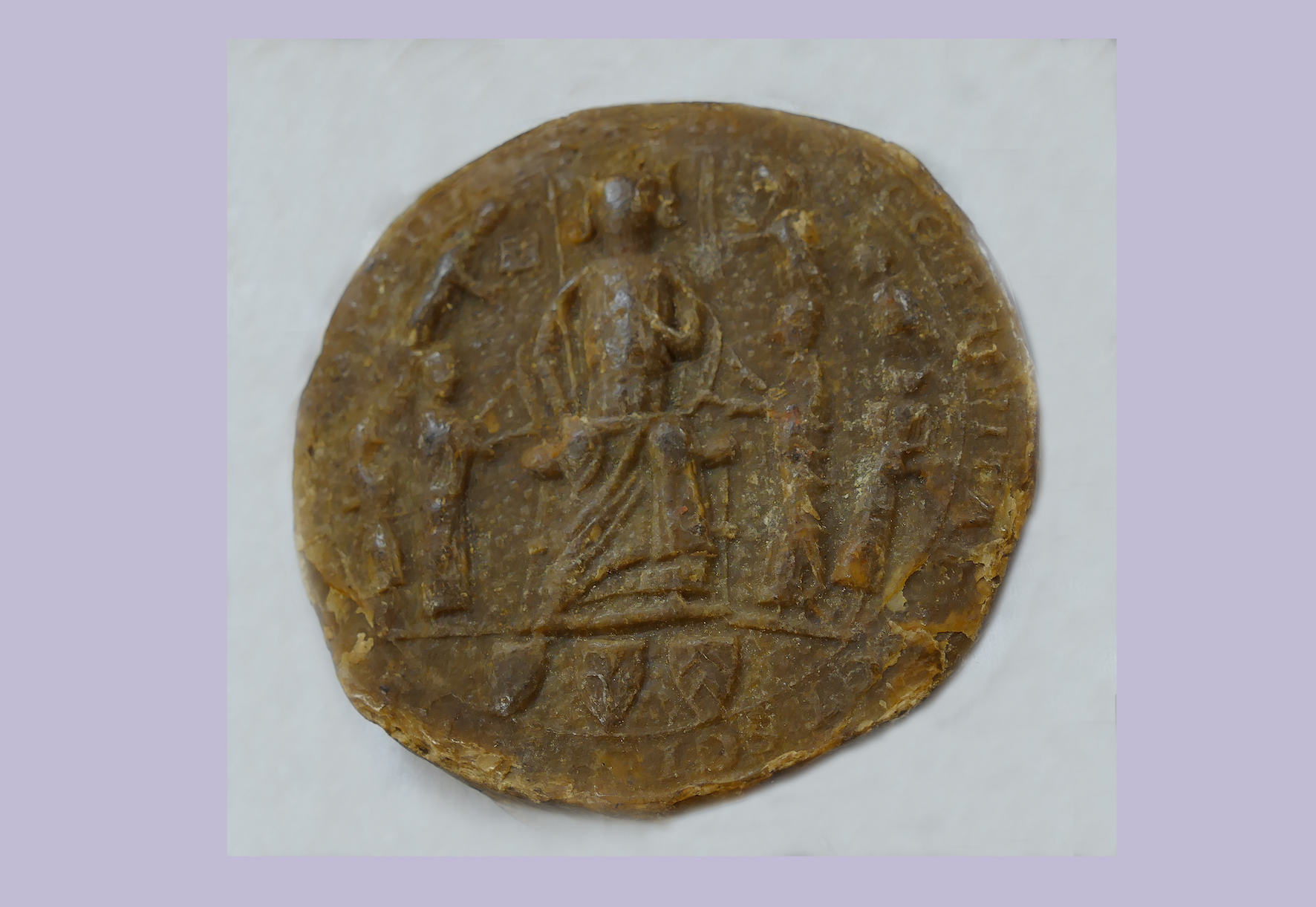 Scone was the ancient traditional site of Scottish king-making. After the death of James I in Perth in 1437 Scottish coronations occurred elsewhere – Holyrood Abbey, Kelso Abbey, Stirling Castle Chapel Royal, and the Kirk of the Holy Rood, Stirling – but Scone dominated throughout the thirteenth and fourteenth centuries, and indeed much earlier. During this period, the Scottish ceremony of king-making witnessed one of its most significant developments: the papal bull allowing Scottish kings to be anointed with holy oil in 1329, which saw a long-sought shift from inauguration to coronation for the rulers of Scotland. This blog will discuss the importance of Scone as the place of inauguration and the unique Scottish ceremony which developed there.

As an ancient site of inauguration and meeting place for the dispensing of justice, Scone was Scotland’s premier ceremonial site. It was centrally positioned within the kingdom at the heart of Perthshire and close to the burgh of Perth, or St John’s, which was a bustling trade hub as well as developing a notable position as a centre for government and royal business in the thirteenth and fourteenth centuries (see, ‘The King’s House in Perth’, ‘A Tale of Two Burghs: How King James’s Death Changed the Destinies of Two Scottish Cities’ and ‘Housing Scotland’s Parliaments in the Reign of James I’). The site was one of both secular importance and religious significance, with the Augustinian Priory of Scone founded on the site in the early twelfth century by Alexander I. Evidence from the thirteenth and fourteenth centuries indicates the use of two distinct spaces (one inside the abbey church and one outside) at the site. This arguably reflects the political tensions around the nature of kingship, and the ceremonies that invested it, during this period as ecclesiastic and secular powers tussled over their rights within the ceremony.

The date that the Scottish inaugural ceremony shifted from an outdoor secular event to one also utilising the abbey church is unknown. However, the increased prominence of Scottish interactions with both the Anglo-Norman English royal house and the papacy during the twelfth century indicate that the role of ecclesiastics in the Scottish ceremony increased following the founding of the priory. One of the best described inaugurations of this period was that for Alexander III, crowned as a boy at Scone in 1249. The ceremony is blessed with chronicle descriptions (albeit later in date and conflicting in some regards) and illustrative depictions, including the Scone seal image. This design, depicted below, shows the king enthroned and surrounded by key figures who had a role in this ceremony, including the earl of Fife who had the traditional role of enthroning the king. Walter Bower’s record of the ceremony in 1249 (Scotichronicon, c. 1440), separates the inaugural rite into two parts with a processional transition occurring between the indoor ecclesiastical space and the outdoor space that witnessed enthronement and the offering of fealty. 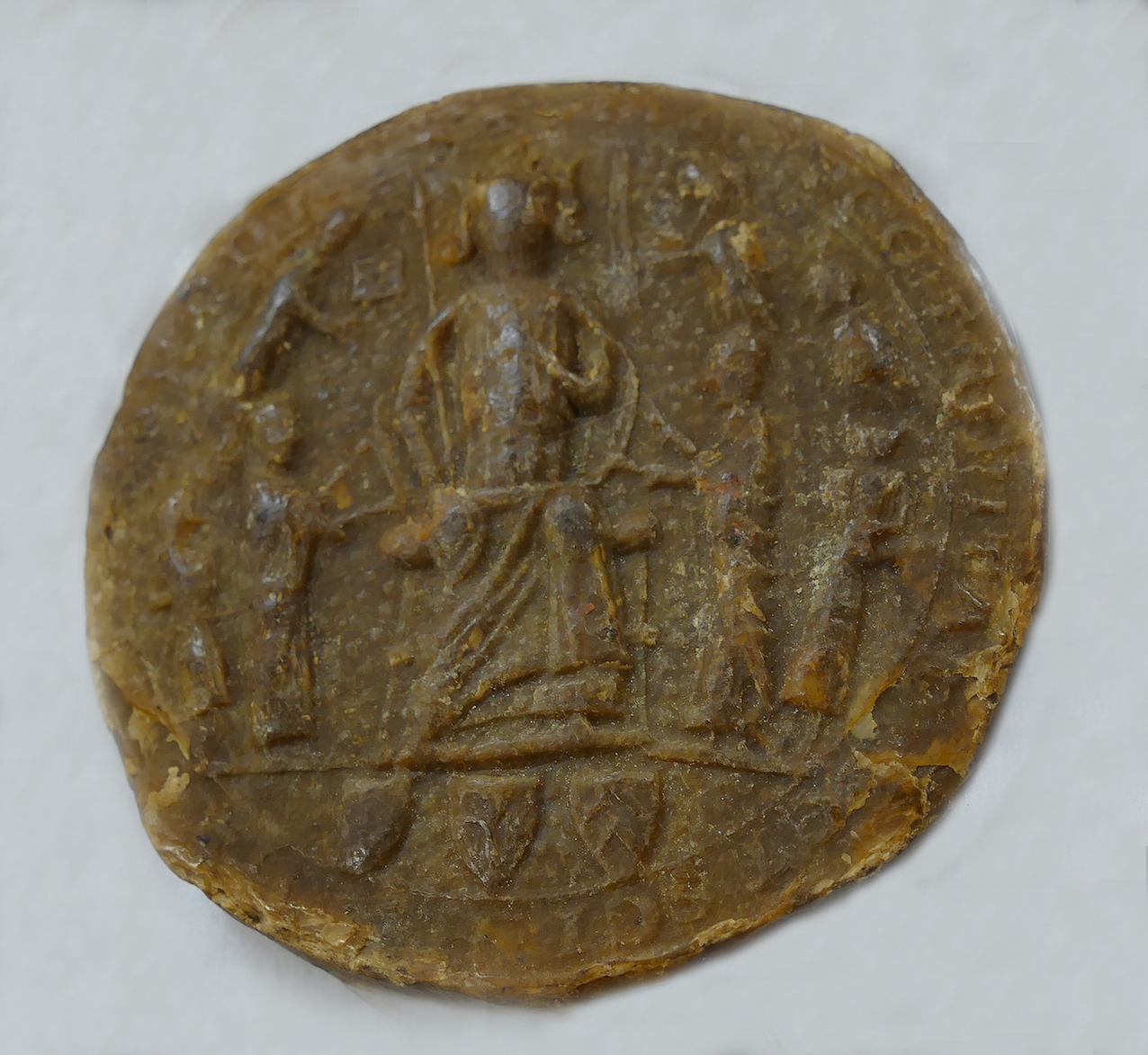 Scone Abbey Seal appended to letter of renunciation by Patrick, Bishop of Murray and commendator of abbey of Scone in favour of Patrick Kynnard of Kynnard, 7 February 1568

The collected prelates, earls and barons made homage to their king

After the granting of the rite of unction in 1329, there was an increase of liturgical rites administered by a bishop that likely occurred within the church. A coronation roll was created in 1331, ahead of the coronation of David II, that potentially rewrote the ceremonial practice in Scotland to incorporate this anointing and crowning of the king. Unfortunately, this liturgical record has not survived. That the redesigned coronation still maintained two distinct indoor and outdoor sections is recorded, however, for the installation of Robert II (the first of the Stewart dynasty and grandfather of James I) in 1371. This ceremony took place over two days rather than one. The parliamentary records specify that on the first day William de Landels, bishop of St Andrews, crowned and anointed Robert II, presumably within the abbey church. On the second day, the action moved outside to the royal throne placed on the ‘hill of Scone’ where the collected prelates, earls and barons made homage to their king individually. During the fourteenth century, the outdoor ceremony also extended to the bestowal of knighthoods, emphasising further the reciprocal exchange of oaths and support between king and secular nobility.

Perth and Scone were centrally prominent to the business of government as well as the making of kings. The underappreciated role of Scone as a secular assembly site was equally important to its standing when considering the links between legitimacy and acclamation, particularly for the Stewart dynasty. Robert II had risen from the ranks of the nobility, as Steward of Scotland, and not without some contestation, to become king in 1371 after David II died without children of his own. Robert I’s statutes entailing the throne to the Stewart line earlier in the century had taken place at Scone and Robert II went on to make all legislation pertaining to the succession at the same site. It was also in the highly politicised space at Scone Priory that Robert II chose to be buried in 1390 taking the centralising of governance and ceremonies of death and succession to new lengths not seen before in Scotland. His funeral took place immediately before the coronation of his eldest son, Robert III, at a time when power was contested between brothers. A clearer delineation of the line of succession from father to eldest son could not have been achieved anywhere else but Scone.

By 1390 a further notable development drew the ecclesiastical figures more noticeably into the outdoor arena, as Thomas bishop of Galloway gave a sermon at the outdoor homage ceremony for Robert III. It is also very unlikely that the earl of Fife took his traditional role of enthroning the king at this ceremony, as the earl was the king’s brother and they were locked in a power struggle. Yet, the homage and enthronement ceremony still took place in a largely secular space outside and was honoured with its own day in the proceedings. The divine status of the king was increasing after the papal bull allowing anointing in 1329, but the secular enthronement in its outdoor setting retained importance. When James I and Joan were crowned at Scone in 1424, therefore, the ceremony was one that both stressed the divine status of the king and confirmed his role at the head of the secular community of the realm. In order to emphasise the latter, James ensured that abandoned secular elements were reinstated, such as the enthronement by the earl of Fife. The earl of Fife at this time was  Murdoch (Murdac) Stewart, duke of Albany and governor of the realm who had ruled the country in James’ absence. As such, having this earl of Fife enthrone the king was another way to demonstrably prove that the transferal of power into the hands of the king had taken place (see ‘The Return of the King (Part 2): Ceremonial Statements of Stewart Power in 1424’).

After his murder at Perth in 1437, the Scots abandoned Scone for the making of Scottish kings

Scone provided the legitimacy that James I required in a way that no other setting could. Despite this, after his murder at Perth in 1437, the Scots abandoned Scone for the making of Scottish kings and the site never regained its former prominence. The coronation would only return to Scone for James IV in 1488 and again for the contested coronation of Charles II in 1651 during the Civil War.

For more on the later coronations, see the upcoming posts by Dr Dean, The Queen Unleashed: Consolidating Power for A Child King and Making Scottish Kings after 1437.