Rituals to Celebrate Perpetual Peace: The Marriage of Margaret Tudor and James IV in 1503 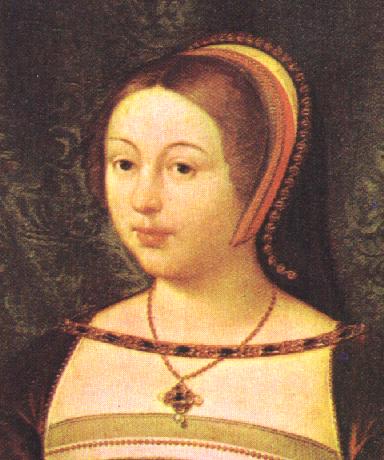 The Marriage of Margaret Tudor and James IV in 1503

University of the Highlands and Islands

The Carthusian Charterhouse at Perth was a royal foundation conceived in part as a mausoleum by James I and his wife, Joan Beaufort, in the 1420s. However, theirs were not the only royal bodies that came to rest within the walls of this sacred space. Margaret Tudor (b. 1512, r. 1513-1542), was also interred at the Charterhouse following her death in October 1541.

Margaret Tudor was sister to Henry VIII of England and took a prominent political role in Scotland during the minority of her son. This blog focuses on the young Tudor princess’s arrival to Scotland and offers the first of four special feature blogs looking at the ‘other’ queen buried in the Charterhouse in the anniversary month of her Scottish royal entry, wedding and coronation in August 1503.

On 25 January 1502, the twelve-year-old Margaret Tudor exchanged wedding vows with Patrick Hepburn, earl of Bothwell, acting as proxy for James IV in a ritual that sealed the Treaty of Perpetual Peace between Scotland and England. This was the beginning of extended ceremonial proceedings that saw Margaret make a journey from daughter to wife and from princess to queen. Expectations were high for this union’s potential following centuries of animosity.

Both Henry VII and James IV had much to prove

Henry VII – the first Tudor king – ruled the larger and richer kingdom, but his was a fledgling dynasty and its hold on power was still shaky following the defeat of Richard III and the Yorkist dynasty at the point of a sword at Bosworth in 1485. The Stewart dynasty was entrenched and had longevity on its side – having ruled Scotland since 1371 – but the king of Scots forged a match that revamped the unpopular and unsuccessful policies of his father. Both Henry VII and James IV had much to prove.

The displays that took place for this marital union and the rituals surrounding it were expensive and elaborate. Indeed, James IV spent significantly more than half of the amount he received as a dowry for his bride – which was £35,000 – on the preparations for his wedding to Margaret. We are lucky that the records for this period are particularly rich, with an intricately detailed descriptive account of the Somerset Herald, John Young, who accompanied Margaret as well as the surviving financial materials from both sides of the border. The journey from London to Edinburgh took place in clear stages that were organised by different people with a variety of individuals as the target audience: the proxy ceremonies in England, Margaret’s journey north through England, the meeting of the Scottish and English parties in the Scottish borders, the royal entry, the wedding, coronation and subsequent ceremonies of celebration.

Margaret’s carriage was decorated with both Scottish and English symbols, a walking statement of Tudor royal authority

The proxy ceremonies organised by Henry VII saw Scottish ambassadors hosted by the Tudor court and witnessed the opening gambits of the ritual gift giving between the two kings, including the rich robe worn by the earl of Bothwell that was given to the English officers of arms. Margaret’s journey north through England from Richmond to Berwick saw the officials of towns and key nobles from each locale welcoming the new queen of Scots. Margaret’s carriage was decorated with both Scottish and English symbols, but in many respects the entourage was a walking statement of Tudor royal authority with a prominent use of the Tudor colours of green and white, and Tudor emblems such as the crowned portcullis. This display of authority and deference was largely aimed at Henry VII’s northern realm – a region in which his support was less secure – and offers an example of how such unions could be utilised to extend domestic power as well as foreign policy.

The return show of Scottish Stewart power began after the queen’s party left Berwick, when a finely attired party of Scots led by the archbishop of Glasgow met the English party at the church of St Lambert in Lamermure to offer reverence to their new queen. James IV made his first appearance at Dalkeith, accompanied by his brother – the archbishop of St Andrews – and major earls. At this interim location, the party paused so that a stage-managed courtship could occur between the king and his young bride, centred on performances of music and dance. Throughout this and the subsequent journey to Edinburgh – which included further performances, such as the king settling a dispute between knights and a chase of a hart (or stag) – James’ chivalric, reverent and law-giving character was emphasised to the collected audience. 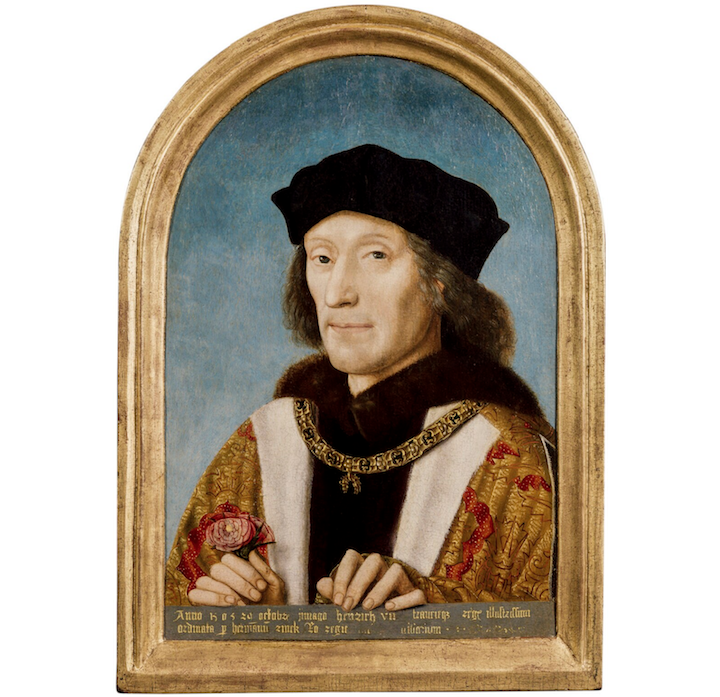 James IV and Margaret entered the city of Edinburgh – by then rising in prominence as the capital of the realm – riding together upon the queen’s palfray or small horse. The royal entry was hosted by the burgh of Edinburgh, so this was a welcome from the people to the royal couple. All royal entries to towns in this period were organised by the townspeople, and this meant that such occasions were ones in which grievances and concerns could be aired within the celebratory pageantry. This was not the case for the pageantry of 1503, which saw a mixture of classical and religious symbols used in the display of celebratory hope and encouraging advice for the future of this Anglo-Scottish union. This royal entry also included the first documented triumphal arches constructed for Scottish pageantry.

The union was further consolidated in the wedding and coronation ceremonies that took place in the church of Holyrood Abbey, where royal lodgings had been transformed into a royal palace during the James IV’s reign. The royal couple wore matching white gowns flowered with gold and bordered with crimson velvet and, after the countess of Surrey who carried Margaret’s train, the ladies followed in groups of four including two Scottish and two English noblewomen in each. The coronation of Margaret included the first explicit reference to the anointing of a Scottish queen consort. It also saw the queen gifted her royal sceptre by the king, rather than by a bishop as was more common, which emphasised not only their partnership but also the manner in which her royal power was a gift from the king. 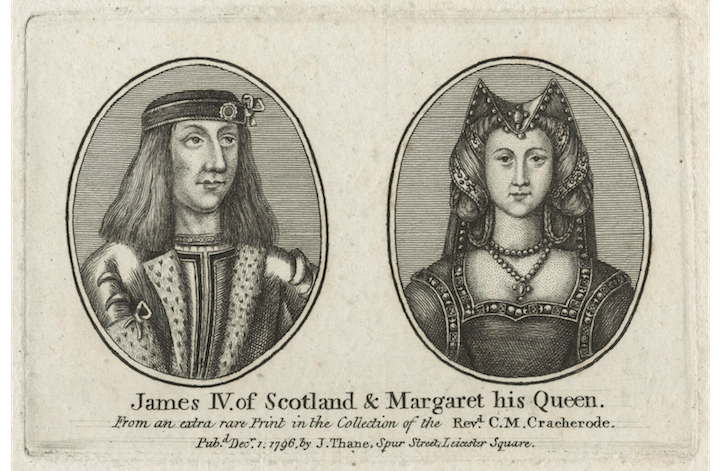 Margaret Tudor and her husband, James IV, were the hope on which Scottish and English people relied for a lasting perpetual peace

Celebrations continued for several days after the coronation and these were marked by displays that emphasised the union of England and Scotland. This included heraldic symbols on clothing, in the rich decoration of the queen’s chambers, and even on the food served. Symbols were central to the ritual visual and sensory dialogue, along with the colour schemes used in dress and décor, precedence and reverence in the manner people were presented and acted, and in the combined entertainment from musicians from both realms. The emphasis upon the uniting of two countries in a royal wedding and the vast investment in the ceremonial display were not new nor specific to this union. Nonetheless, it certainly serves to highlight the pressure placed on young royal brides and the expectations that were laid upon them. Margaret Tudor and her husband, James IV, were the hope on which Scottish and English people relied for a lasting perpetual peace and their marriage celebrations were designed to remind them of such duty.