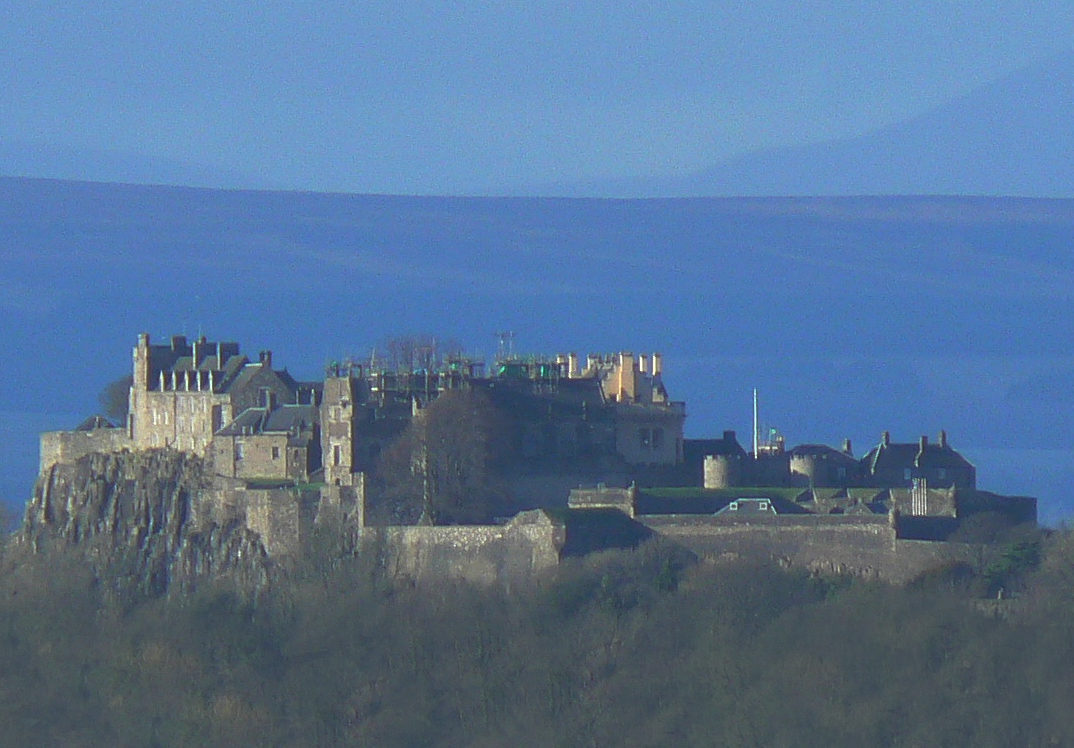 The Fall of the Albany Stewarts (Part 4)

Clearing Away the Pieces.

At the end of March 1425, James could look across the chessboard of his great game for mastery of Scotland with some satisfaction. The Black King and Queen, Duke Murdac and Duchess Isabella were in his hands, their castles at Doune and Falkland safely under his control, while Isabella’s father Earl Duncan of Lennox and two of her sons, Walter and Alexander, were safely warded in castles far from any centre of Albany Stewart power. It looked like checkmate but nagging doubts and anxieties over a backlash from the last members of that family still at large haunted him. His failure to secure everything he wanted in the parliamentary session at Perth had been a slap in the face that awakened him to how deeply his kinsmen’s power was embedded in the Scottish political establishment. There were men in parliament who had seemed completely in tune with James’s plans but who, at the last, had baulked from what he wanted to achieve. What was worse, there was a whiff of rebellion in the air from the fastnesses of the Lennox, where Murdac’s remaining son, James the Fat, was now based and stirring up support from amongst the outraged supporter of Earl Duncan and his grandsons. The king had tried to isolate and contain that possible threat late in 1424 with his resumption of control of Dumbarton Castle, but reports from the west would have told him that the region was a smouldering powder-keg.

But what was he to do long term with his cousin and his family? Reconciliation was now clearly impossible and would surely have pushed waverers firmly into support for the Albany Stewarts. James had probably already decided before the Perth parliament that Walter of Lennox had to stand trial and be condemned for his treasonable behaviour before and since the king’s return, while his pronouncements against supporters of ‘manifest rebellours’ had perhaps been intended to prepare the ground for action against Earl Duncan. News of James the Fat’s actions in the west, where with the support of his grandfather’s former secretary, Bishop Finlay of Argyll, Albany’s supporters were starting to gather their strength, now let James extend that plan to the whole of his cousin’s family. There was only one solution now; the utter destruction of Murdac and his sons.

By end of April 1425, few could have doubted that the king was planning to try the whole Albany Stewart family in his hands for treason and rebellion. Murdac and Isabella were placed in the ward of Archibald, 5th earl of Douglas, and William, 2nd earl of Angus, both nephews of the king, and consigned by them to keeping in the castles of Caerlaverock and Tantallon, far from any hope of rescue by their adherents. Sure of support from two of the greatest noblemen of southern Scotland, James returned immediately to stamp out any threat from Murdac’s territorial heartlands in Fife and Menteith. In Fife, he also revealed a further strand of his assault on the Albany Stewarts was vengeance for his elder brother, David, duke of Rothesay, whose death in 1402 in his uncle’s castle at Falkland was widely regarded as murder. Members of old Duke Robert’s affinity who still served Duke Murdac and who had had a hand in the keeping of Duke David over twenty years earlier were rounded up and imprisoned. Others saw the way the tide was running and declared their loyalty to the king rather than be caught up in what many must have regarded as the inevitable ruin of the Albany Stewarts. Having thus secured his foothold with Albany territory, James now recalled parliament to assemble at Stirling, a symbolic location which Duke Robert had long held as the centre of his power and from where Doune in Menteith and the mountains of Lennox beyond were clearly in view. 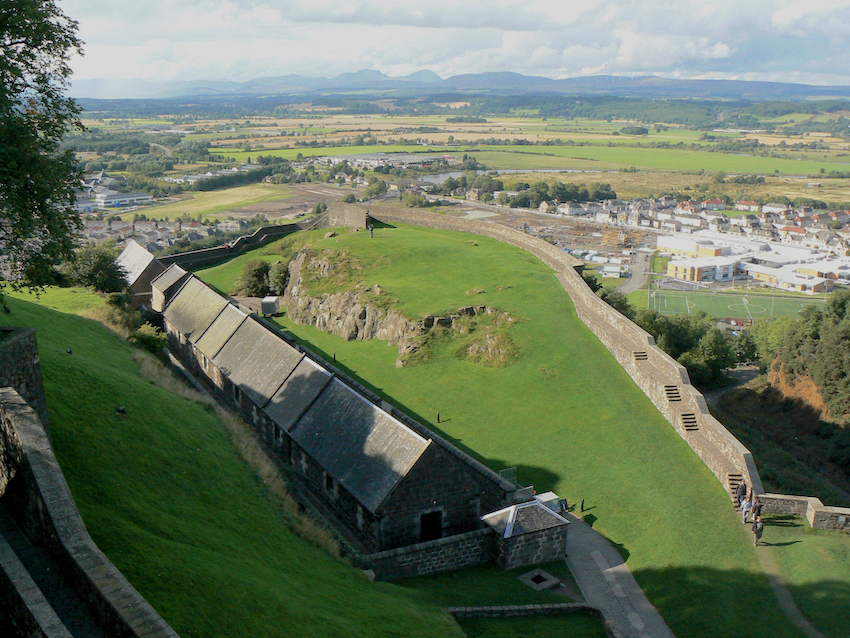 Stirling Castle – looking North West from the castle into the heart of Duke Murdac’s earldom of Menteith.

The captured rebels were summarily executed at Stirling in a clear statement of James’s intentions for all who opposed him.

Before parliament had even reassembled in the third week of May, the final decisive stage in the long struggle between the two most senior lines of the Stewart family had begun. By then, James had swung many waverers firmly behind him. What may have helped tip some into James’s camp was news from the west of James the Fat’s long-expected rebellion. Described by Walter Bower as ‘a man ready for anything foolhardy’, this grandson of Duke Robert put impulse before planning, a trait that his grandfather would have despised, but there was probably method in his armed defiance of James. By seizing a castle so recently taken into royal hands and demonstrating that James and his supporters were not invincible, he probably hoped to weaken the king’s standing in the eyes of the Scottish nobility and win some time to secure the release of his family from James’s hands. Rather than bring others flocking to his standard, however, James the Fat’s assault on Dumbarton and slaying of the king’s half-uncle, the Red Stewart of Dundonald, was a failure – John Colquhoun held the castle firm against them and mounted a counter-attack as the Lennox-men retreated, capturing several – and assured them that the full wrath of the crown would fall on the rebels. Displaying the ruthlessness learned from Henry V during the French campaigns, the captured rebels were summarily executed at Stirling in a clear statement of James’s intentions for all who opposed him.

One of the most momentous gatherings in Scotland’s turbulent history

Historians have long lamented the loss of the records of the parliamentary session that reconvened at Stirling on 18 May, for it was one of the most momentous gatherings in Scotland’s turbulent history. Walter Bower’s Scotichronicon provides us with an outline sketch of events and also gives us a sense of the popularity of the Albany Stewarts that made their destruction imperative for James. On 24 May, he recounts:

…with the king sitting formally in judgement and holding his royal symbols of office, Walter Stewart the heir to the dukedom of Albany [a man very tall in stature, most loving as a person, very wise in his speech, highly pleasing to everybody and loved by all] was accused, convicted [by an assize for robbery], and beheaded in front of the castle. [His death was lamented not only by those who knew him but also by those who had never seen him on account of his admirable reputation.] In the same way the next day his father the duke, his brother Alexander [who were giants among men of noble and refined character], and the grandfather [of Walter and Alexander on their mother’s side] the earl of Lennox [an octogenarian] were condemned to death.

The assize who condemned them included James and Murdac’s remaining uncle, Earl Walter, former Albany adherents like the earl of Mar, James Douglas of Balvenie, and John, lord Montgomery, and James’s nephews the earls of Angus and Douglas. Several may have felt deep qualms about what they were doing and, as Bower’s account suggests, several would have well understood the deep reservoir of personal popularity that the Albany Stewarts had within Scotland. There were many in the kingdom who still looked on Duke Murdac and his sons as their lords and who would continue to nurture deep hatred for King James that drew them into the conspiracy that resulted in the king’s death twelve years later.

In May 1425, however, James was brimming with confidence in his triumph. Five more of James the Fat’s captured supporters – including at least one from Fife – were hanged, drawn and quartered at Stirling and one quarter sent with tar and chains for its display to Dumbarton, the scene of the dead man’s crimes. Such low-born casualties of James’s vengeance could be humiliated in death to underscore a point, but the noble dead  – Murdac, Duncan, Walter and Alexander – all received honourable burial in the Dominican friary at Stirling, sign perhaps that the king recognised that his actions against them had been lacking in clemency and reeked of injustice. 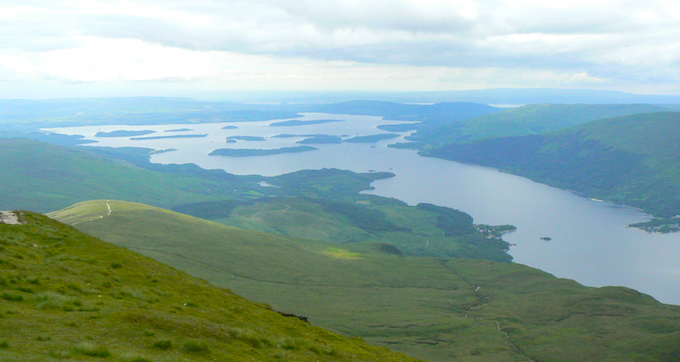 Loch Lomond from Ben Lomond – Inchmurrin and the castle of the earls of Lennox, the last stronghold of the Albany Stewarts, is the long island at the centre of the image, closest to the most distant extension of the loch.

King James’s fears were not unfounded, and he continued to live uneasy of the threat of a future Albany Stewart challenge

The board had now been cleared; almost. Only James the Fat and his ally, Bishop Finlay, remained at large and the king was now ready to deal with them harshly. A force was raised in the Stewartry lands and penetrated the Lennox from the south; the rebels fled, pursued by land and sea. Inchmurrin castle on its island at the south end of Loch Lomond, the seat of the earls of Lennox, held out under a long siege. By the time that it surrendered on 8 June its nominal lord, James the Fat, had fled to Ireland where he was given protection by the kinsmen of Alexander MacDonald, earl of Ross and lord of the Isles. Although he never returned to Scotland, dying in exile in 1429, the king remained in fear of his cousin’s potent status as the Albany Stewart heir and his standing as next in the line of succession until the birth of his own son in October 1430. As reports of a fleet sailing to Ireland in the year of James the Fat’s death to bring him back ‘that he might be king’, King James’s fears were not unfounded, and he continued to live uneasy of the threat of a future Albany Stewart challenge. Ultimately, it was bonds of loyalty and duty to long-dead men that gave reality to the final Albany Stewart challenge that ended in James’s death at the hands of men who had once looked to Dukes Robert and Murdac and their sons for lordship and leadership.

Featured Image: Stirling Castle from the South – the castle was probably the meeting-place of the parliament of May 1425 in which the Albany Stewarts were condemned.