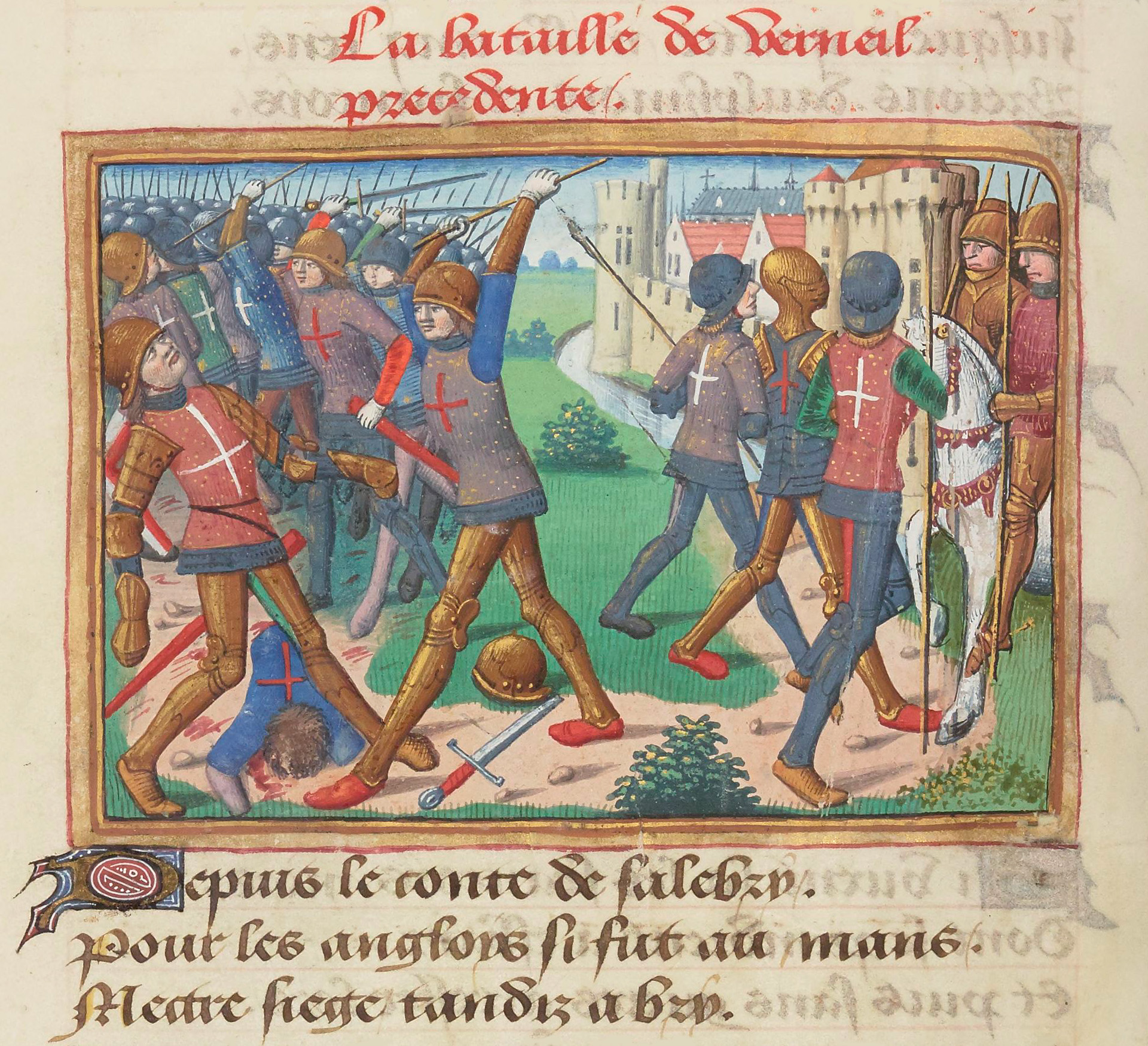 Just as James was starting on the final leg of his journey home to Scotland in early April 1424, his cousin John Stewart, earl of Buchan, and brother-in-law Archibald, 4th earl of Douglas, were preparing their 6500-strong Scottish army to resume the campaign against the English in France. Buchan and Douglas had departed for France on 7 March as the negotiations for the king’s release reached a climax. As their ships headed for La Rochelle, they removed from Scotland a number of key supporters of Murdac, 2nd duke of Albany, several of whom had reason to be fearful of the imminent return of their long-absent king. Their departure weakened Murdac’s position within the kingdom but also presented James with a potential problem; Buchan and Douglas were in command of a formidable fighting force that could become the foundation of a military challenge to the king.

Buchan and Douglas might well have had an intervention in domestic politics at the back of their minds when they sailed for France, but it was not their priority. Still flushed with the success of their victory in 1421 over the English at Baugé in Anjou, which had seen the killing of Henry V’s younger brother and heir-presumptive Thomas, duke of Clarence, the French campaign was seen as an opportunity to secure wealth through ransoms and plunder, and for the Scottish leaders titles, offices and lands in France. Buchan had secured appointment as commander of the armies of the Dauphin Charles (the future King Charles VII of France), while for his part in bringing this new force to aid him Douglas gained the duchy of Touraine for his service in 1424 and his son, Archibald, earl of Wigtown (who had remained in Scotland in 1424), had been created count of Longueville. These were rich lands but, to secure them, their new Scottish lords had a vested interest in ensuring the total defeat of the English in France. We should not forget, too, that the Anglo-French war was also, very importantly, an arena in which to fight a proxy war against the English, for the release of James was accompanied by a truce that was intended to end the conflict on the Anglo-Scottish border.
The new Scottish army reached France at a critical moment, for since Henry V’s death his brother, John, duke of Bedford, the English commander in France, had gone on the offensive to secure the inheritance of the child-king Henry VI. By the end of 1423, Normandy had been effectively cleared of the last outposts of support for the Dauphin and Bedford was able to send fast-moving raiding parties south into the Loire valley that probed almost as far as the Dauphin’s base at Bourges. In 1424, Bedford was determined to push out from his secure zones in Normandy and around Paris, to clear resistance from Picardy in the north-east and, bolder yet, conquer Maine and Anjou. In the late summer, Bedford advanced into the county of Perche on the frontier between Normandy and Maine, and laid siege to the castle of Ivry.
Buchan and Douglas, in agreement with the Dauphin and his councillors, knew that they had to stem the English advances that had been achieved since 1422 and prevent them from consolidating their grip over the northern half of France. Recent small successes over Bedford’s Burgundian allies and over a sizable English expeditionary force gave them some confidence that the main English army could be confronted and broken. Ivry presented an opportunity to meet Bedford and his army in the field and defeat it, so on 4 August Buchan, Douglas and the French commanders the duke of Alençon and the count of Aumale, marched north-east from Tours. Before the siege could be relieved, however, Ivry had fallen to the English and the Franco-Scottish commanders decided instead to attack some English-held strongholds that formed the leading edge of Bedford’s advance towards Maine. The first of these was Verneuil, which the Scots took in the second week of August using a ruse to deceive the English garrison. News of Verneuil’s fall reached Bedford on 15 August and he decided to march immediately to retake the town and, if possible, meet the Franco-Scottish army in the field. On 17 August, the two armies finally confronted each other.

Considering its significance, few Scots have heard of the battle of Verneuil while, in comparison with battles like Crecy, Poitiers and Agincourt, it lacks much prominence in English histories of the Hundred Years War. For the English at the time, however, it was hailed as a ‘second Agincourt’ in terms of its significance for the course of the war. It was a close-run thing, where the famous English archers had been swept aside early in the fighting by a force of 2000 mercenary Milanese heavy cavalry, but the Italians had then fallen on the English baggage train and started to plunder it rather than returning to the main contest and breaking the dismounted body of English knights and men-at-arms. The main forces had been grinding out a grimly bloody melee at the heart of the battlefield with neither side giving much ground until the English archers regrouped and began to exact a terrible toll on the French contingent. When this broke and fled, Buchan and Douglas were left surrounded and fought on to the bitter end, with the English also offering no quarter to their enemies. By the end of the battle, both earls were dead, along with most of their 6500 men – traditional accounts say that only 40 Scots survived the defeat at Verneuil. Ahead of Bedford and the River Loire now lay nothing, and he was quick to exploit his hard-won advantage.

The elimination of the Scottish army in France was a disaster for the French but it was, in many ways, the perfect outcome for James. Thousands of his subjects lay dead but their deaths removed one of the greatest obstacles to his fixing of a firm grip on the political life of his kingdom. Alive, Buchan, Douglas and their army afforded Duke Murdac and his family an insurance policy against James; the king would not dare to move against them while the army existed and could return to support them against him. With it gone, James was immeasurably more powerful and confident of success in his looming struggle for ultimate power with his Albany Stewart kinsmen. When news of Verneuil reached Scotland, there were as many who looked with trepidation towards James as mourned for the dead. 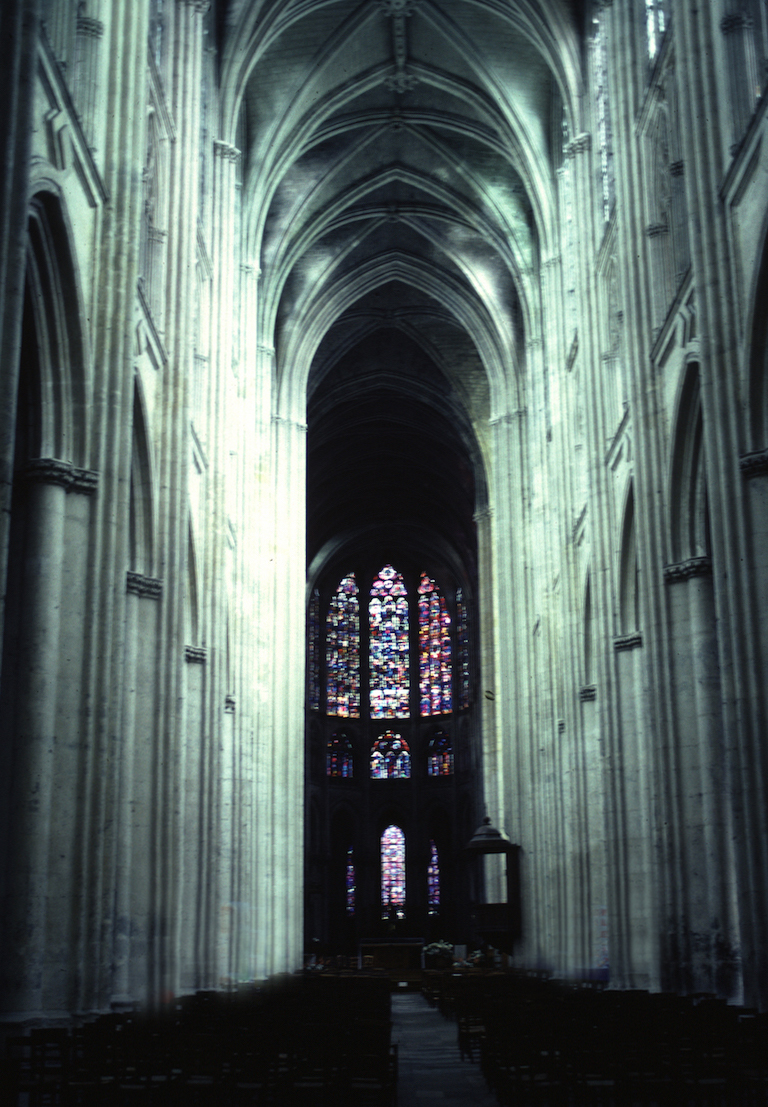 Cathedral of St Gatien at Tours: it was here in the capital of his French duchy rather than in the splendid tomb that he and his wife, Princess Margaret, were preparing at Lincluden in Galloway, that Archibald was buried after his death at Verneuil.