THE FIRST TRAITORS EXECUTED AT EDINBURGH 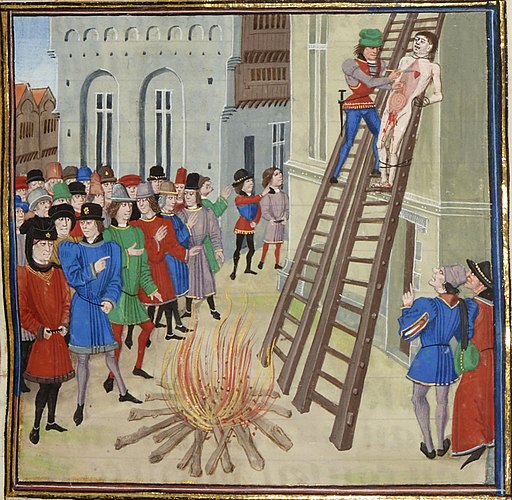 THE FIRST TRAITORS EXECUTED AT EDINBURGH

NO PUNISHMENT IS ENOUGH FOR THESE DEGENERATE MURDERERS

CROWD BAYS FOR THE BLOOD OF THE CONSPIRACY’S LEADERS.

Vast crowds today gathered in Edinburgh’s High Street to witness the executions of the first of the traitors who murdered our liege lord, James, king of Scots, in his lodgings at Perth. I watched from a gallery opposite the mercat cross as Robert Stewart, lately chamberlain of our martyred king’s household, and Christopher Chambers, the Perth businessman who had profited from a too close relationship with the criminal Albany Stewarts, were made to pay the penalty for their unspeakable crimes. It is horrible to believe that these men were intimates of our lord king, one his own cousin, who should have shielded him with their bodies, not hungered to thrust their traitors’ knives into his. These filthy traitors died filthy deaths, deserved by all who commit such a foul affront against God and our people, for the bloody murder of the Lord’s Annointed.

Before hushed crowds, Stewart and Chambers were led from the castle with halters round their necks and tied naked to a ship’s mast set up on the back of a cart in the High Street where all could see. Back-to-back upon this tree, they were pelted with stones and filth until the hangman stepped forward and all fell silent in breathless anticipation of the end. But there was no swift hanging, no quick headman’s axe, for their crimes merited much longer suffering. Silently, the hangman produced from the floor of the cart his weapons – tongs and an axe – and the crowd let out a sigh. Armed with his sharp iron pincers, he tore at their flesh until the blood poured down their legs, while the cart was dragged through the streets to display them in all their gory ruin to the people. To see such once strong and fair men reduced to broken and crippled wrecks almost turned the crowd’s hearts to pity, but the hangman’s torments all the time twisted out their blasphemous confessions of their crimes. All this they endured for nigh an hour before the procession came to a halt outside the Tolbooth besides St Giles’ Kirk.

Condemned by their own words and deeds, these twins sons of Satan were cut free from their bonds and tied to the tails of horses to be dragged through the town. Some of the angry mob had to be beaten back by the sergeants as they tried to rip the criminals limb from limb before they had publicly confessed their guilt. Bloody and befouled with the filth with which they had been pelted, Stewart and Chambers were then hoisted on a drying rack high above the crowd’s heads, there to cry out the nature of their crimes for all to hear. Even the gentlest-hearted of the crowd were horrified at the cruelty of the plan hatched by these sons of Belial, the foulness of their perjury, the foulness of their broken faith.

As a horrified silence settled over the assembled people, Stewart and Chambers were cut down and dragged to a new-built scaffold in the middle of the High Street near the Cross. There, without the comfort of a confessor, the hangman used his old, rusty axe – these false knights did not deserve a clean, sharp-bladed sword – to strike off their traitorous heads and then butcher their bodies into quarters to be displayed throughout the land. Their heads will go to Perth, there to rot over the gates for all to witness and scorn. Thus perish the enemies of God and Man.

That such punishments should be meted to these lesser members of the conspiracy is surely a token of the fates that our lady, the Queen, has in store for the rest of the venomous band. We await with keen anticipation news of the sentencing of Walter Stewart, that foul old conspirator and evil flame of all-consuming treachery, and of his foulest creature, that loathsome toad of degeneracy, Robert Graham. With Easter and the Holy Season fast upon us, their ends must surely be soon in coming.

Image: The execution of Hugh Despenser the Younger, as depicted in the Froissart of Louis of Gruuthuse. Loyset Liédet / Public domain