Sugar and Spice and All Things Nice 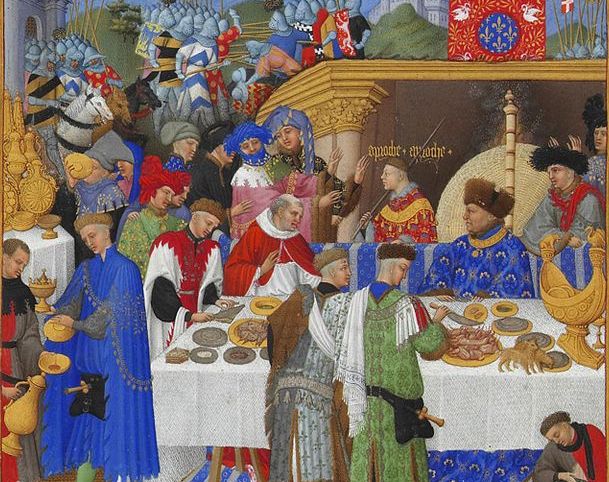 Sugar and Spice and All Things Nice.

No menus survive from the banquets that were lavishly prepared celebrations of James I’s power and superior status. The food which was prepared for the king, often including some of the rarest and most expensive commodities of the day, formed one facet of the culture of display that surrounded medieval kingship. We can be sure that James ate the best and most expensive meals that could be created at that time, and we can look to the records of feasts prepared in England, France and Italy in the early fifteenth century to get a sense of the menus that would have been served up to him. In today’s post, I look at some of the evidence for ingredients and how they might have been prepared to make that dinner ‘fit for a king’.

Purchases of spices for the king’s use begin to appear regularly in the royal accounts from 1428/9 onwards. Some were small, individual purchases, like the 20s spent by the roll-keeper John Waltoun in 1428, but normally the figures given in the financial records are annual totals. By 1435, the household comptroller was spending around £55 annually on spices for the royal household, but there was also a separate ‘clerk of the spices’, William Norville, who spent another £23 6s 8d. Other than single references to a quantity of ginger bought in 1430 and two pounds of pepper owed as rent from Tranent and from Fa’side near Edinburgh, what other types of spices were being bought is, frustratingly, never specified in the accounts from James I’s reign. We are left to guess the nature of the ‘certain spices’ that were shipped to the king in two ‘roundels’ in the vessel called the Batisman in 1435. It is an unfortunate quirk of the records for James’s expenditure, for in his father’s reign and then later in the fifteenth century we find reference to saffron, pepper, ginger, cinnamon and cumin bought for the king’s use. From contemporary recipe books, we know that much of these spices were used for flavouring wine and making fiery and strongly flavoured sauces for meat.

Sugar appears amongst the royal purchases from 1424/5 onwards, often paired with almonds in the accounts. It is likely that some of these were made into marzipan or worked into sweet pastries from which elaborate fancies were shaped for serving at the top table during some of the more spectacular royal banquets. Descriptions from contemporary banquets in England, France and Italy describe ships, fantastic beasts, figures bearing the coats-of-arms of the lord to whom the food was being served amongst the strikingly visual works of food-art prepared for the greatest occasions. We can only imagine how the infant James, duke of Rothesay, the future king James II, coped with the 48 lbs (22.8 kgs) of almonds shipped to Doune Castle for his use in 1430/1. Presumably the baby prince was not consuming them all by himself! At only 26s 6d, almonds were relatively cheap, certainly when compared to modern prices. The real expense was on the sugar. In 1428/9, the then clerk of the spices, Nicholas Kirkdale, spent £3 8s on 12¾ lbs (5.78 kg) of sugar. For its weight, that makes sugar one of the most expensive commodities bought for the king.

Fruit, vegetables and herbs were amongst the produce of the royal gardens – to which there are specific references at Edinburgh (there described as a herbarium or kitchen garden) and Doune – and so were delivered cost-free to the king’s kitchen and table. Consequently, it is unusual to see expenditure on separate purchases of such items. In 1427/8, Nicholas Kirkdale, clerk of the spices, took delivery of a barrel of unspecified ‘fruit’, costing 24 shillings. This is likely to have been imported fruit, possibly dried, again for inclusion in the rich sauces, pie-fillings and sweet-meats for the top table. Oranges are a possibility, but these would have been bitter varieties – it was later in the fifteenth century that sweet varieties were developed – which would have been candied or used in flavouring wine, but medlars and quince are also likely. In the 1434/5 accounts, payment of £6 11s was made to one John Dee for 20 barrels of onions and 11 barrels of apples. Most vegetables, including peas and beans, however, would have been consumed by the lower-status members of the household – these were very much ‘peasant foods’ – but dried peas were also used as a sweetener in milk that was used to make flavoured custards.

Like the fruit and vegetables, most of the basic meat needs for the household were provided from the king’s personal flocks and herds, with fish coming from his own fisheries. One of James’s great gains from the annexation of Menteith was the important salmon fishery on the River Teith upstream from the castle, from which fresh salmon were supplied to the royal household. Very occasionally, usually when the king and his household were travelling away from the main centres in which they were based, one-off purchases of beef carcases – known as marts – or of barrels of salt salmon were made. For example, when the king travelled to Inverness via Aberdeen, barrels of salmon were bought in some of the main salmon-fishery areas from the Dee and Don mouths at Aberdeen, the Deveron at Banff, the Spey and Findhorn in Moray. It is important to remember that as a Roman Catholic at this time, fish was consumed at least once a week and more regularly through Lent. Fish, therefore, needed to be supplied in bulk to the household and was salted or dried for out-of-season consumption. Interestingly, there is no reference to stockfish – the air-dried cod that was exported in vast amounts from Iceland and northern Norway to all over Europe, but there are multiple references to purchases of salted salmon and salted herring. Much of the latter came from Crail in Fife, where James had his own storehouse for them. In the 1425/6 accounts, payment was recorded for the drying and carriage to the king’s house of 30,000 herring at Crail. Different types of herring are mentioned; red, white and ‘syse’ or soused varieties. One interesting purchase in 1430 from certain unnamed Norwegian merchants was for an unspecified number of lampreys, a species that was immensely popular in medieval Europe – Henry I of England traditionally died from eating ‘a surfeit of lampreys’ – its rich, beef-like flesh often made into pie-filling. The ‘fish’ transported to the king from Inverkeithing in 1427/8 and for which a horse had to be hired to carry it, is likely to have been a porpoise or dolphin, which had traditionally been caught in the Firth of Forth since at least the twelfth century. The main produce from the Forth brought to the king, however, was oysters, of which over 45,000 were delivered to his household in 1434/5. Unlike nowadays when their rarity makes them expensive, oysters were cheap food in the fifteenth century and the volume delivered here suggests that they were made into bulky stews – or more valued for their shells for use in building work – than for consumption at top table.

In an earlier post, I looked at the royal kitchen and actual food preparation. Other commodities linked to the cooking process also appear in the financial records. There are references, for example, to four stone of suet delivered from the butcher in Tranent, while purchases of ‘grease’ seem to have been of cooking-fat rather than lubricant to oil the wheels of the king’s carts. Some of this may have been rendered down in the brass pots bought for the king’s kitchen in 1434/5.

Fragmentary and often generalised though they are, the Exchequer Rolls from James’s reign reveal the richness and sophistication of his diet. Just as he was purchasing wine from all over Europe, so his agents were securing him exotic spices, sugar and rare meat or fish with which to impress all who dined at the top table in his household. For James, the quality, expense and rarity of the food that was placed before his guests and himself were as important for the proclamation of his power and majesty as the magnificent chambers in which they ate and the jewels with which he adorned himself and Queen Joan.

Featured Image: Public Domain. Taken from the calendar of the Très Riches Heures showing the household of John, Duke of Berry exchanging New Year gifts. The Duke, in blue, is seated at the right.