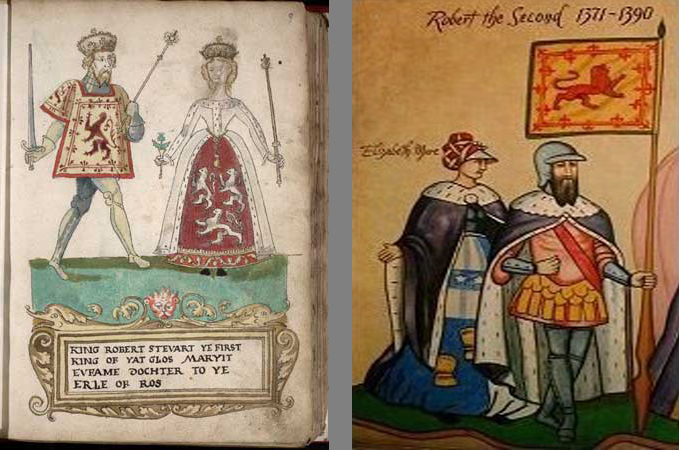 Power, politics and sex has been a heady mix throughout human history. From Helen of Troy and Paris or Antony and Cleopatra, to John F Kennedy and Marilyn Monro, the Profumo Affair, or even Boris Johnston’s extra-marital relationships, they have been basic elements in the making and breaking of men and women of power. For James I, the complex love lives of his wider Stewart kin created multiple problems and opportunities, offering him both levers to exert pressure or blood-bonds that extended his reach throughout the kingdom.

At the root of the complex network of Stewart relatives with whom James was forced to interact and compete was his grandfather, Robert, the first Stewart king. As Robert the Steward, grandson of King Robert I, he had been nearly 55 when he succeeded his uncle, King David II, as King Robert II. Born in 1316, he was the only son of David II’s elder half-sister, Marjorie, and Walter the Steward, who had been one of Robert I’s staunchest allies throughout the dark days of the Wars of Independence. Marjorie had died giving birth – or shortly after giving birth – to Robert, and he had been aged just 10 when his father died in April 1326, followed three years later by his grandfather the king. His uncle, King David II, was nine years his junior and played no active part in the renewed civil war for control of the Scottish crown between the supporters of the ruling Bruce family and the deposed Balliols and for Scotland’s independence from England that erupted in 1332. When the nine-year-old King David was sent for safety in France in May 1334, the eighteen-year-old Robert, his nearest male kinsman and heir-apparent to the kingdom, remained in Scotland and over the next few years gradually established himself as the leader of the resistance to the pretender, Edward Balliol, and his English patron, King Edward III.

It was in his late teens and early twenties that Robert forged the first of many relationships that resulted in the at least 20 legitimate and illegitimate children through whom he achieved what has been referred to as the ‘Stewartisation’ of the Scottish nobility. His first of several mistresses was Elizabeth Mure, daughter of Sir Adam Mure of Rowallan, an important landholder with estates bordering Robert’s personal lordship of Kyle in central Ayrshire. His eldest son, Walter, was possibly born before Robert and Elizabeth were ‘married’ in 1336. Nine more children followed, three brothers for Walter – John (who became King Robert III), Robert (the future Duke of Albany) and Alexander (the ‘Wolf of Badenoch’) – and six daughters, Margaret, Marjorie, Elizabeth, Isabella, Joanna and Katherine, whose marriages tied the MacDonald, Dunbar, Hay, Douglas, Keith and Logan families to their father’s network. Even in the 1330s, however, there were questions being raised over the regularity of Robert and Elizabeth’s marriage – they were distant cousins, so some murmured that their relationship was incestuous – with supporters of his uncle the king and other political rivals using this to question the legitimacy of his children and, consequently, their place in the royal succession. To end those questions, in 1347 Robert appealed to the pope for dispensation to formally and canonically re-marry Elizabeth and, if there were any question over the status of his children, to legitimate them in the eyes of the Church. Their second marriage took place in 1349.

Within a few years, Elizabeth was dead and buried in the Dominican friary at Perth. Robert was not to remain a widower for long, and in May 1355 he took as his second wife Euphemia, daughter of Hugh, earl of Ross. This was a far more political marriage than his first had been, providing him with a link to the greatest landholding family in northern Scotland, whose estates were spread from Aberdeenshire to Skye. It yielded two more sons, David (who became earl of Strathearn and Caithness) and Walter (lord of Cortachy and later earl of Atholl), and two daughters, a second Elizabeth and Gelis, who married into the Crawford Lindsay and Douglas of Nithsdale families respectively. There was never any question over the legitimacy of these four children and, after their father’s death in 1390, there were loud voices in the kingdom that suggested that they or their children should take precedence over the children of Elizabeth Mure.

Robert’s fertility was in sharp contrast to the childlessness of his uncle, David II, neither of whose two marriages and several mistresses resulted in any offspring. Indeed, it may have been yet another dimension to the sour relationship between the two men that marred Scottish politics in the 1350s and 1360s, that David was so clearly incapable of fathering children of his own and spent much of his time seeking to find an alternative heir to the kingship (including the possibility of offering the crown to a son of King Edward III of England). This is where the question marks against the children of Robert’s first marriage began to be raised yet again.

Love may have been real in the relationship between Robert and Elizabeth Mure, but his relationship with Euphemia Ross seems to have been altogether more transactional. Certainly, it is after 1355 that the clearest evidence for multiple other sexual partners emerges clearest. The best-known was Mariota Cardney, daughter of an influential Atholl landowner whose brother was later made bishop of Dunkeld. Robert, who had been in possession of the earldom of Atholl since the 1340s, may have intended their relationship to provide him with a tie to a family whose support was crucial for consolidating Stewart control in the southern Highland earldom. They had four sons, the eldest of whom, John (born c.1377) eventually succeeded to the Cardneys’ lands and titles, while the others received estates near Perth, in east Angus, and in Kinross-shire. Another mistress, a member of one of the Gaelic kindreds on the Stewart-controlled island of Bute, gave him another son, John (born c.1360), whose descendants are the Marquises of Bute. He may have had as many as eight further children by other women, amongst whom were Alexander, who became a canon of Glasgow, and Thomas, who was archdeacon of St Andrews and dean of Dunkeld.

While their father seemed to be on a one-man mission to spread Stewart genes through the ranks of the Scottish nobility, Robert’s children appear mostly to have been altogether more morally conservative. The one big exception was the fourth son of his marriage to Elizabeth Mure, Alexander, who seems to have been his father’s favourite. In 1382, Robert arranged for his marriage to the widowed Countess of Ross, another Euphemia, which gave Alexander control of the Ross heritage to add to his already extensive lordship of Badenoch. Like his father’s 1355 re-marriage, this was a political match designed to tighten the Stewart’s control over the central and northern Highlands, and it seems to have been loveless from the outset. Alexander was already in a relationship with a Highland woman, Mairead inghean Eachainn, who may have been a member of one of the extensive Mackay lineages. By her, he had at least six sons and one daughter, the eldest of whom, Alexander, went on to be earl of Mar and lieutenant in northern Scotland for his cousin, James I. Euphemia Ross was not, however, prepared to allow herself to be humiliated by Alexander and found a ready supporter in her brother-in-law, Robert, earl of Fife. Earl Robert used his influence over the two bishops within whose dioceses most of the estranged couple’s lands lay to have them force Alexander to renounce his mistress and return to his wife. When Alexander breached that instruction, he was subjected to humiliating ecclesiastical censures. This was one of several factors that led Alexander in 1390 to attack the lands of the bishop of Moray and burn down his cathedral at Elgin. Fife, who had taken Euphemia under his protection, now actively supported her in securing a divorce, obtained in 1392, which led to Alexander losing control of the bulk of his lands in the west and north Highlands.

The taint of possible bastardy that attached to the children of Robert II and Elizabeth Mure did not prevent his eldest surviving son, John, earl of Carrick, from succeeding to the throne in 1390 as King Robert III. The question, however, did re-emerge in the reign of James I and was rumoured to be one factor in the 1437 conspiracy that led to his assassination. Two strands came together in this event. On the one hand there was the lead assassin, Sir Robert Graham, whose nephew Malise was the grandson of David, earl of Strathearn, the elder son of Robert II and Euphemia Ross, and on the other was their younger son, Walter, earl of Atholl. Graham was deeply resentful of the manner in which James had treated his young cousin, Malise, handing him over in 1427 as a hostage for his ransom and, shortly before his departure from the kingdom, stripping him of Strathearn and compensating him with less than half of the earldom of Menteith. If James’s descent could be proven to be illegitimate, Malise was the senior representative of the unquestionably legitimate Stewart-Ross line. James was understandably happy to keep Malise a prisoner in England, where he remained until 1453. From February 1437 until the birth of the future James III in 1451, however, he was recognised as the heir-presumptive to the Scottish throne. In his absence, his great-uncle Earl Walter, as eldest surviving member of the Stewart family and, of course, unquestionably legitimate son of Robert II and Euphemia Ross, was able to secure himself a powerful place at the heart of James I’s regime. He may have been happy to remain a loyal servant of his nephew, but when he began to fear that his line might suffer the same fate as the Albany Stewarts, his thoughts perhaps turned to the crown. Amongst the many unknowns of the events of 1437 is what Atholl intended, had he managed to secure control of power as regent for the child, King James II. Just as 46 years later King Edward V of England was to be stigmatised as illegitimate and deprived of the throne by his uncle, Richard III, so we might conjecture might Earl Walter have secured the elimination of the senior – and questionably legitimate – Stewart line.