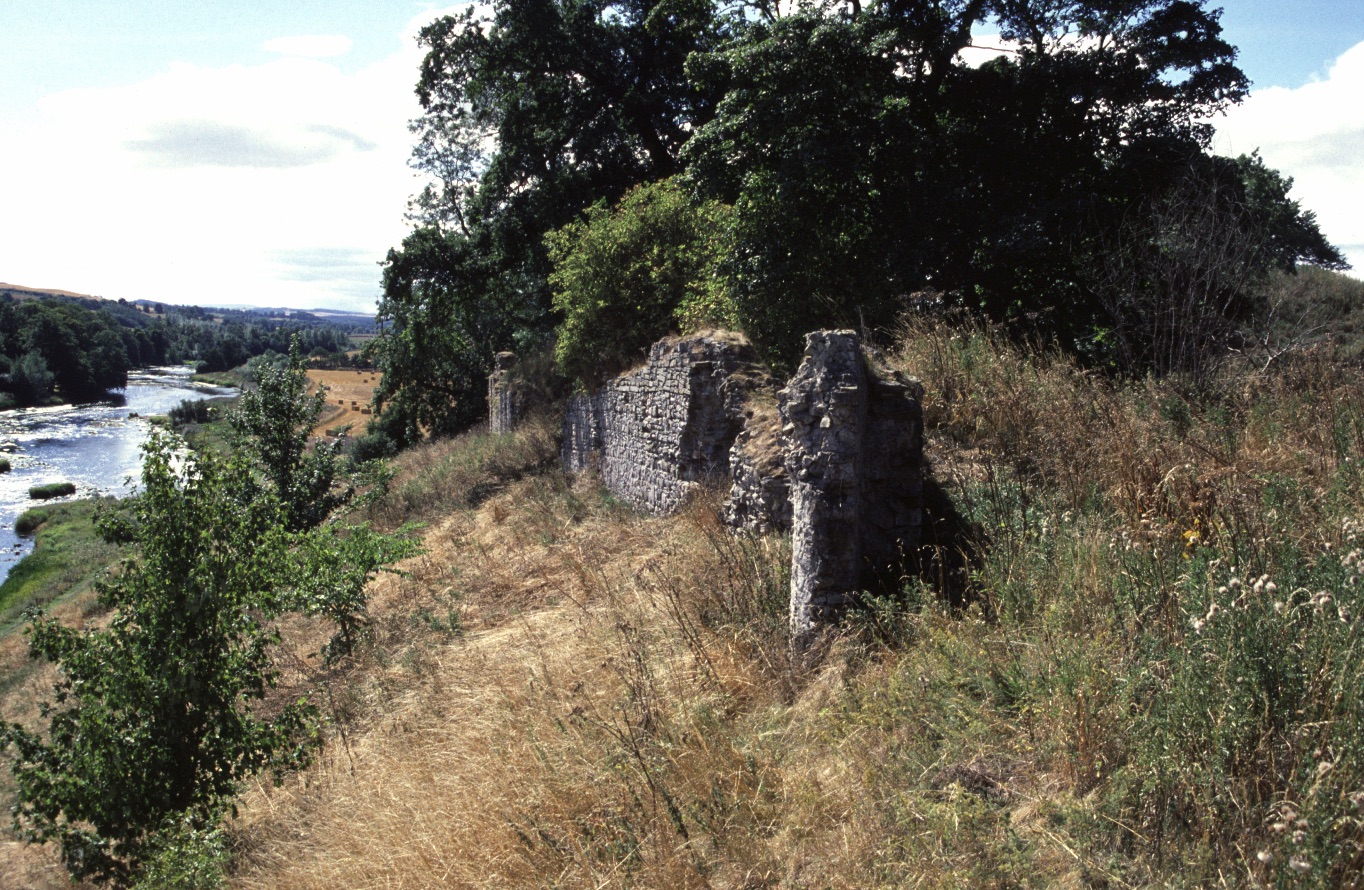 Almost invisible amongst the trees and scrub on the summit of the long ridge between the rivers Tweed and Teviot just west of their confluence at Kelso, the fragmentary ruins of Roxburgh Castle are a sad remnant of what was once one of Scotland’s greatest royal fortresses. We do not know when the naturally strong site was first fortified, but King David I (1124-53) made it one of his chief residences and founded alongside it a royal burgh that grew to become one of the richest in the kingdom before 1296. The location of a great international trade fair – the St James Fair – and the primary market centre for all of Roxburghshire, the burgh grew rich on the trade in wool and hides and the king’s sheriff in the castle creamed off a profit for the crown.

Surrendered to Edward I in 1296 after the fall of Berwick to the English invaders, Roxburgh became with Berwick one of the twin pillars of English control of the eastern Borders. Such was its strategic significance that the castle was destroyed on the orders of King Robert I when Sir James Douglas captured it on 19 February 1314. Possibly because of that destruction, little remains of King David’s original stronghold, or is at least visible in the existing ruins. Rebuilding probably started in the 1330s when the English King Edward III invaded Scotland and was granted control of the whole of southern Scotland except for Lothian by his puppet king of Scots, Edward Balliol. Much of what we see now belongs to the English-built castle which, except for a brief period between 1342 and 1346, remained in English hands down to its destruction in 1460.

Control of Roxburgh enabled the English crown to dominate of most of the lower Tweed valley and Teviotdale. Through the later decades of the fourteenth century and into the early years of the fifteenth, Scottish attempts to regain possession of Roxburgh and the rich lands around it were led by the Earls of Douglas and Earls of Dunbar, which gave them great power and influence both regionally and in national politics. Sieges in 1385 and 1417 failed miserably. When James returned from captivity in England in 1424, he was determined to curb the influence of those families and reassert the crown’s position as chief defender of the Border.

Constrained at first by the terms of the treaty by which he had secured his freedom, James did little to cause friction in the border zone with England. By the 1430s, however, as he felt more secure in his power and the bonds with England began to fray, he began to voice his kingdom’s claims to the lost lands in the south. In 1433, in an attempt to maintain peace between the kingdoms, the English proposed to return Roxburgh to the Scots, but James favoured an alliance with France and a triumphant military re-capture of this symbol of foreign power in his kingdom. In 1436, James renewed the Scottish alliance with France and in the summer decided to lead a major campaign against Roxburgh. His plans had exposed sharp divisions amongst the nobility and gave those opposed to James’s style of government and policies, and those who still had residual loyalties to the families who had been forfeited or disinherited by him, something around which to come together. Despite the clear hostility to his aims, James got his war.

The expedition that he led south from Edinburgh was reputed to have been one of the greatest armies assembled in Scotland to that time. Arriving before the walls of Roxburgh at the start of August, James drew up his army for a siege, but it had long been known that the attack was coming, and Roxburgh was well-garrisoned, supplied and recently strengthened. After just fifteen days, as an English relieving force approached from the south, James abandoned his aims and hurried north. Some sources suggest it was the approaching enemy that caused him to flee, but on version of the chronicle compiled by Walter Bower alleges that Queen Joan had arrived in the camp with disturbing news and, alarmed supposedly by rumours of a conspiracy against him amongst his own force, James had departed hurriedly with her. The Scottish army broke up in confusion and dispersed, leaving much of their baggage train and all of James’s expensive new artillery to be plundered by the jubilant men of the castle’s garrison. It was a humiliating failure, almost as bad for James’s reputation as a powerful if not invulnerable ruler as a defeat in open battle. His grip on power never recovered from the debacle at Roxburgh, for it had exposed his fears and gave confidence to his opponents. It was in the aftermath of the siege that conspiracies truly began to come together, beginning when Sir Robert Graham attempted to arrest James that October and ending with his assassination just over four months later.

Roxburgh remained in English hands for nearly another quarter century until it was besieged again in 1460 by James’s son, King James II. Although James II died before castle’s fall, when one of his own cannons misfired and burst while he was watching the artillery bombard against Roxburgh’s walls, his widow and young son, James III, pressed on to take and destroy the fortress. Briefly refortified in 1547 during another English invasion of Scotland, it was finally dismantled and abandoned at the end of that episode. Now, apart from the massive earthworks at its western end and the precipitous scarped slope and ditch on its north, only a few shattered sections of curtain wall and towers fringe the summit of the ridge. It is, nevertheless, a hugely impressive site whose power and strength are clear to see. The ruins are a scheduled ancient monument but the site itself belongs to the Dukes of Roxburghe, whose mansion at Floors stands on the opposite bank of the River Tweed north of the old castle. The ruins are accessible at all times but are best seen in winter or early spring, before the summer vegetation covers the site.