Praying for a Cure: Plague Saints and Protection from Epidemics in Medieval Scotland 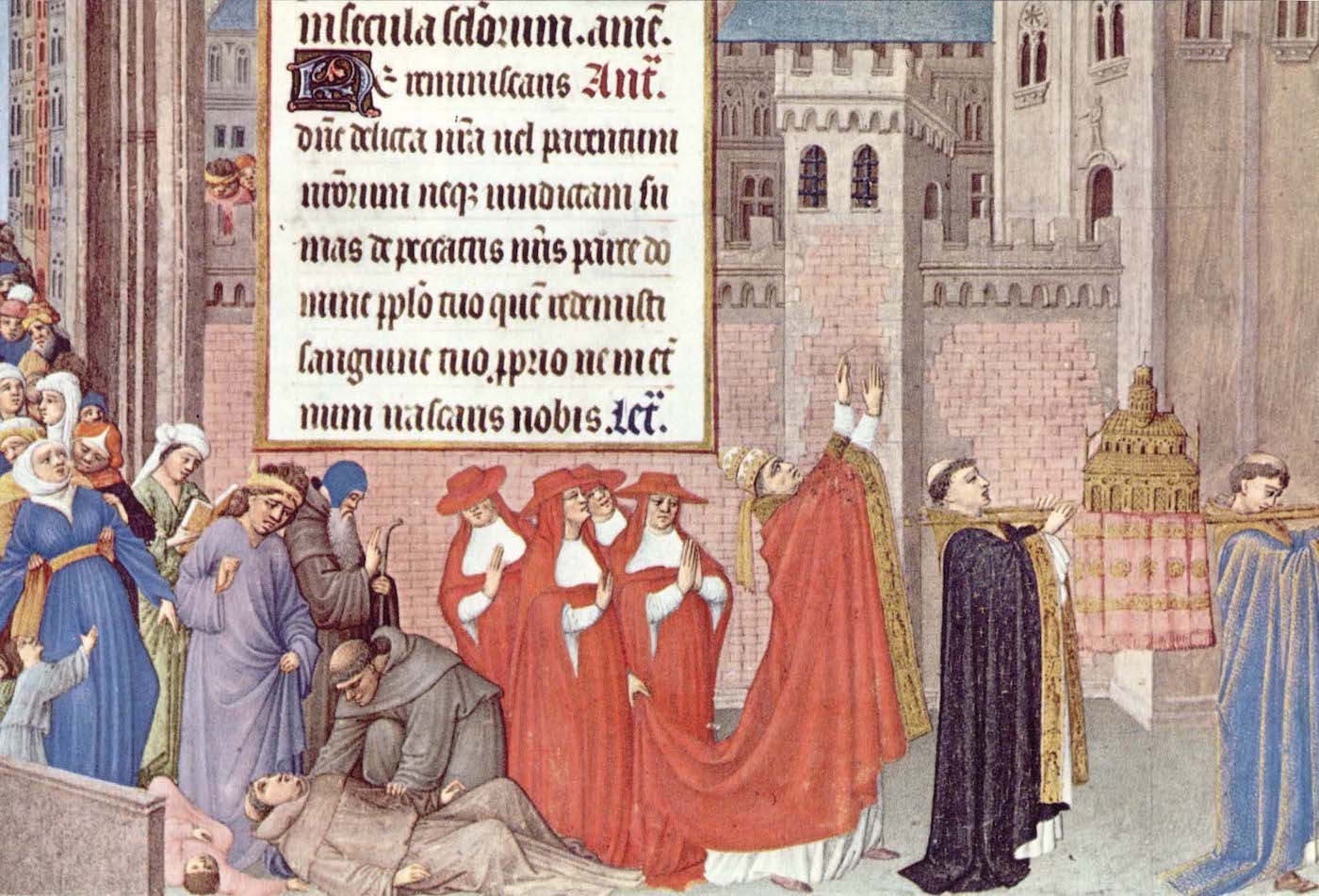 Praying for a Cure: Plague Saints and Protection from Epidemics in Medieval Scotland.

In a previous post, I wrote about the Scottish responses to epidemic disease enshrined in the measures of the 1456 act of parliament issued in the time of James I’s son, James II. Perhaps the greatest amount of detail in that piece of legislation was devoted to religious arrangements, extending the king’s protection to clergy who breached quarantine rules to undertaken processions and conduct services that were intended to secure Divine intervention to staunch the spread of plague. Like all diseases, plague was believed to be a scourge sent by God to punish humanity for its sins, a spiritual malaise that manifest itself externally in the corruption of the victim’s body, so prayer and devotions were believed to be more certain cures or prophylactics than any medical treatment. Religious practice remained a feature of plague-control measures in Scotland down to the mid-seventeenth century, with every epidemic outbreak being accompanied by instructions from the king’s council for a re-application of the 1456 act and the enforcement of a strict regime of prayer, fasting and abstinence from sexual activity, group festivities and general excess of celebrations. The current regulation of social distancing and the clamping down on group association to slow the spread of Covid-19 is simply the enforcement of a centuries-old policy that was known to work.

All across Europe from at least the sixth century onwards, religious processions and the carrying of relics of saints around plague-afflicted communities had been one of the most visible actions taken to curb the spread of disease. Apart from the reference within the James II legislation, we have little surviving evidence for such activities in Scotland before the early sixteenth century. One of the best examples dates from the early 1500s, during a succession of epidemics that struck both rural and urban communities across the kingdom. It details how Bishop George Brown of Dunkeld, the diocese that stretched from the northern edge of Perth north and westwards into Highland Perthshire, used the relics of St Columba that were housed in a shrine in his cathedral to give the people of his diocese protection. His biographer, Alexander Myln, who was a canon in Brown’s cathedral, recounts how the bishop took practical steps to limit the spread of plague, prohibiting people from gathering at Dunkeld for great religious festivals during the epidemic.

Since the actual parish of Dunkeld was a huge, sprawling territory and parishioners from its eastern and northern districts had to pass through Dunkeld itself to get to the parish church which lay on the west bank of the Tay in the village of Little Dunkeld or Birnam, he split it into three smaller units and built new churches for the two new parishes. But he also took more faith-based measures, taking the saint’s bones from their reliquary box and dipping them in water, which he then gave to the people of his diocese to drink. Myln recounts how at Caputh, most of the parishioners drank the water, but some refused. When the plague passed through their village, those who had drunk the water were spared, while those who had scorned the opportunity died horribly. The purpose and moral in his story is obvious.

Columba, as one of the greatest Scottish saints and patron of Dunkeld diocese, was a natural protector to whom the people of the diocese would look during such times of crisis. He was, however, not the only ‘plague saint’ to whom people turned. From the late fourteenth century, new saints’ cults had sprung up all across western Europe with particular anti-plague attributes. Some were repurposed cults of long-established figures, like that of the Virgin Mary, who was portrayed as a shielding mother spreading her spiritual cloak over humanity and protecting them from the arrows and darts of plague that God was showering down upon the earth. 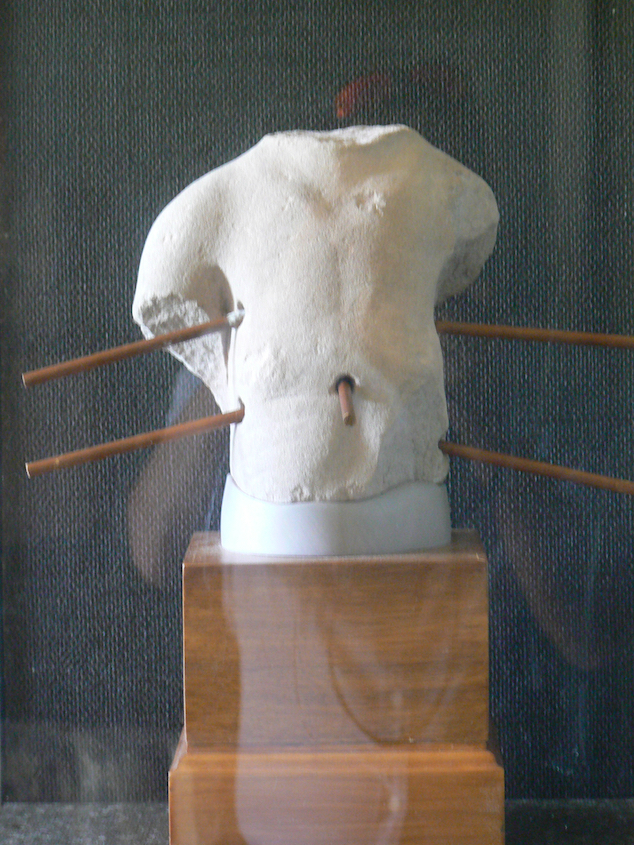 Another popular, older cult was that of St Sebastian, a martyr who had been tied to a tree by pagan Roman soldiers who shot at him with bows for target practice. His arrow-filled image was seen as representative of him taking the plague darts on behalf of humanity. Chapels dedicated to St Sebastian were founded in some of the greatest urban parish churches in Scotland, including within St John’s Kirk in Perth, where the altar to the saint, founded by the Carthusian monk John of Bute in 1457, was located in the north aisle of the choir. 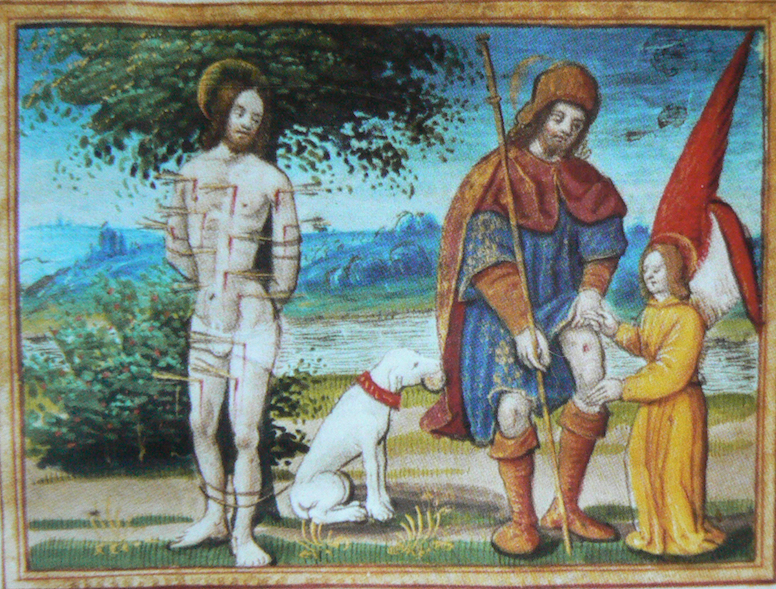 One of the best-known European plague-saints was St Roch (also known as Roque or Rollox), whose cult originated in southern France and northern Italy. He was a pilgrim saint who, reputedly, had entered a plague-stricken village and prayed that the epidemic would enter him rather than afflict the populace, and so took it with him when he left. He was usually depicted as a pilgrim displaying plague buboes on his thigh, which a protective angel was lancing to purge him of the disease. Chapels to St Roch were founded on the moors outside some towns – like Dundee, Edinburgh, Glasgow and Stirling – where plague victims were ordered to remove themselves to and shelter in booths for the duration of epidemics. He was especially popular amongst those already afflicted by plague, who prayed to him in the hope that he would do for them through his saintly intercession with God what he done in life for that original community and take the plague from the sufferer into himself. Altars dedicated to him were also established in the big urban parish churches, that in St Giles at Edinburgh being founded by the burgess, Richard Hoppar, in the midst of the same epidemic in the early 1500s as Bishop Brown countered through the use of the Columba relic. At Perth, a Roch altar, with an image of the saint, was established during the same epidemic by Cristine Brown in the burgh’s parish church.

In a world where medical science leads the fight against disease, the faith which led victims and those fearful of infection alike to seek saintly protection against plague might seem alien. But in the Middle Ages, where saints were still reputed to work miracles and to have the power to hear the prayers of the faithful and intercede with God on their behalf, and where there was no knowledge of viruses or bacilli, praying to a saint was probably as effective of some of the quack cures offered by the doctors of the day. What is perhaps more remarkable is that despite the repeated failure of the saints to intercede – other than in stories such as that reported by Alexander Myln – faith in their protective power continued right to the eve of the Reformation.