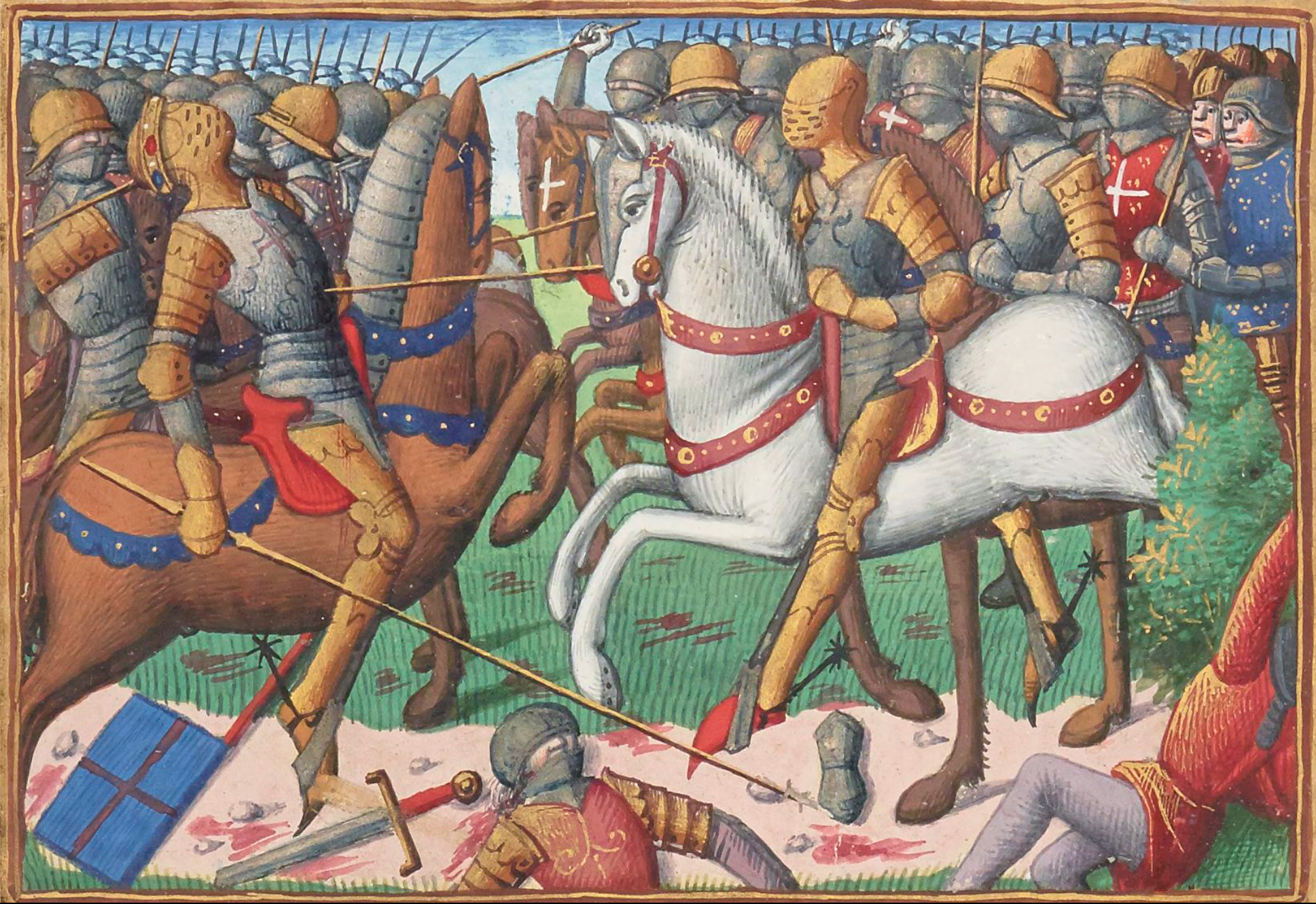 Amongst the many unusual experiences that James I had during his eighteen-year captivity in England was his deployment as a ‘secret weapon’ in King Henry V’s war in France. Between May 1420 and February 1421 and again from June 1421 to August 1422, James participated in two of Henry’s campaigns that sought to make good the claim to the French throne that his victory at Agincourt in 1415 had turned into a real possibility. The Scottish king was not just brought along as a trophy to be paraded around in Henry’s entourage, to show the reach of English power from northern France to the far reaches of the British Isles. He was there with a purpose.

Henry hoped that James’s presence would neutralise the threat posed by the Scots to his dominant position in the war in France. He wasn’t fearful of the security of England’s northern border with Scotland, for a still-operative truce kept the Scots from raiding across that frontier. What he wanted to neutralise was the 6000-strong army of Scots that had come to France in 1419, led by Archibald Douglas, earl of Wigtown, the son of James’s brother-in-law, Archibald 4th earl of Douglas, and John Stewart, earl of Buchan, the younger son of Robert, duke of Albany, and thus James’s cousin. The truce did not prevent Scots from fighting abroad and the conflict in France gave them the opportunity to win income from ransoms and plunder. Wigtown and Buchan, whose army had landed at La Rochelle and was operative mainly in the western Loire valley, had added backbone to those in France who wished to continue the resistance and who were rallying around the heir to the French throne, the Dauphin Charles.

Scottish soldiers fighting in France had concerned Henry from the start of the war, for large numbers of Scottish mercenaries had been present in French armies throughout the later fourteenth century after the Treaty of Berwick which had ended the Anglo-Scottish wars that had raged almost unbroken since 1296. Although there had been flare-ups in the ‘hot’ war between the two kingdoms in the 1380s and early 1400s, the conflict had been mainly a ‘cold’ war and actual hostilities had switched to proxy fighting elsewhere in Europe. Scots had been captured during the Agincourt campaign in late summer and autumn 1415 and some high-status Scottish prisoners who had been in the Norman port of Harfleur when it surrendered to the English on 22 September were sent to join their king in the Tower of London at the campaign’s end.

Buchan and Wigtown’s arrival in France had the potential to change the course of the war. Henry knew that and in early 1420 mobilised James as a means to neutralise them. James perhaps needed little persuasion to get involved, for he saw both Douglas and Buchan as representatives of families who had done little to secure his release and, in his cousin Buchan’s case, had placed the ransoming of Murdac Stewart, captured by the English in 1402, ahead of their efforts to free their captive king. By bringing James into his army, where he would be displaying his standard as king of Scots, he placed those Scots fighting in France in the position of bearing arms against their king. If captured, they would meet the fate of rebels.

On 24 May 1420, Robert Rolleston, clerk of the King’s Great Wardrobe, submitted a receipt to the Exchequer for £86 paid to him as an advance for purchasing clothing for James, who was to come by the King’s command, to his presence in France, there to serve him in his war. A later receipt by James himself for a further £42 6s 8d paid to him, listed purchases of armour and other preparations for his person in the war, including horses – a grey one for him personally is specified amongst the receipts – tents, banners, and other equipment. Suitably equipped as befitted a king, James sailed from Southampton before the end of May and, passing through Rouen, Meulan and Paris, proceeded south-eastwards to join Henry at Troyes for the English king’s marriage there on 2 June to Catherine de Valois, daughter of the French king, Charles VI.

Following the wedding festivities, James accompanied Henry and the English army west into the Yonne valley. There, they besieged and captured a series if important centres that were being held in the name of the Dauphine, beginning with Sens in June and Montereau in July, before settling down in July to besiege Melun, which had been under blockade by English soldiers since June. Four months later, on 18 November, the town surrendered, and, amongst the starving survivors of its garrison, it was found to contain several Scots. All were hanged, perhaps to the grim satisfaction of James who had spent the preceding weeks in the insanitary discomfort of the besiegers’ camp.

James spent Christmas at King Henry and Queen Catherine’s court in Paris. There, he experienced his first sustained taste of the rich court cultures of France and England, the elaborate ceremonial that surrounded their kingship, and all in the magnificent setting of some of the most splendid royal palaces, noblemen’s mansions and great churches in early fifteenth century Europe. Finally, in February 1421, nine months after his departure, he accompanied Henry and Catherine back to England and, gorgeously attired, attended her coronation as queen at Westminster on 23 February.

If James’s presence in France and the treatment of the Scottish prisoners taken at Melun were meant to deter further Scottish participation in the anti-English resistance there, Henry and James were sadly mistaken. A month after he sailed from Calais to Dover, Buchan, Wigtown and their soldiers accompanied a French army into Anjou to block the advance of an English army led by Henry’s younger brother, Thomas, duke of Clarence. On 22 March at Baugé east of Angers, the Scottish contingent was the major player in a battle that saw the death of Clarence and the flight of the remnants of the English force.

We have no record of James reacted to the news that his subjects had been responsible for the death of the English king’s brother and the defeat of his army, but the fact that he seems to have been enthusiastic at the prospect of returning to fight in France suggests that he was greatly displeased. Indeed, he even tried to raise his own military contingent from his personal lands in Scotland to come to fight under his banner. That effort failed, but in that and his acceptance of the execution of his subjects at Melun, we seem to see James identifying with his captors rather than his own people.

In June 1421, James sailed back to France with Henry, accompanying the fleet as it sailed from Dover to Calais. The first few weeks of the campaign were spent moving through Flanders, Artois and Picardy, but in early July Henry arrived in Paris. Finally, he crossed the Seine, with James prominent in his army, settled down to besiege the key city of Dreux, which after a month. When news came that the Franco-Scottish army was at Beaugency on the Loire west of Orléans, Henry arched rapidly south in the hope of forcing them into another battle. James went with him, again to raise the prospect for the Scots of bearing arms against their own king. The two forces came within sight of each other and we can imagine James glowering across the river at the standard of his cousin, Buchan, but although the Scots and the English were spoiling for a fight, the French commander ordered a retreat to avoid the risk of another Agincourt. In total in that campaign, James spent some 210 days in the field in France, equipped, maintained and funded by Henry V. It hardly speaks of a reluctant prisoner forced into bearing arms against his own people.

There can have been few amongst the nobility in Scotland who were not aware of James’s actions in 1420-1422, especially of the hangings at Melun and the confrontation at Beaugency. It can only have raised the trepidation that many felt when negotiations for James’s release finally began in earnest in the months after Henry V’s death on 31 August 1422. Here was a man who had been willing to side with their kingdom’s enemy, accompany its king on a campaign against their traditional French allies, and look on impassively as his subjects were hanged for honouring their treaty with France and refusing to surrender to the English crown. After the summer warmth of northern France, there would have been a distinct Scottish chill awaiting James as he headed north in March 1424.