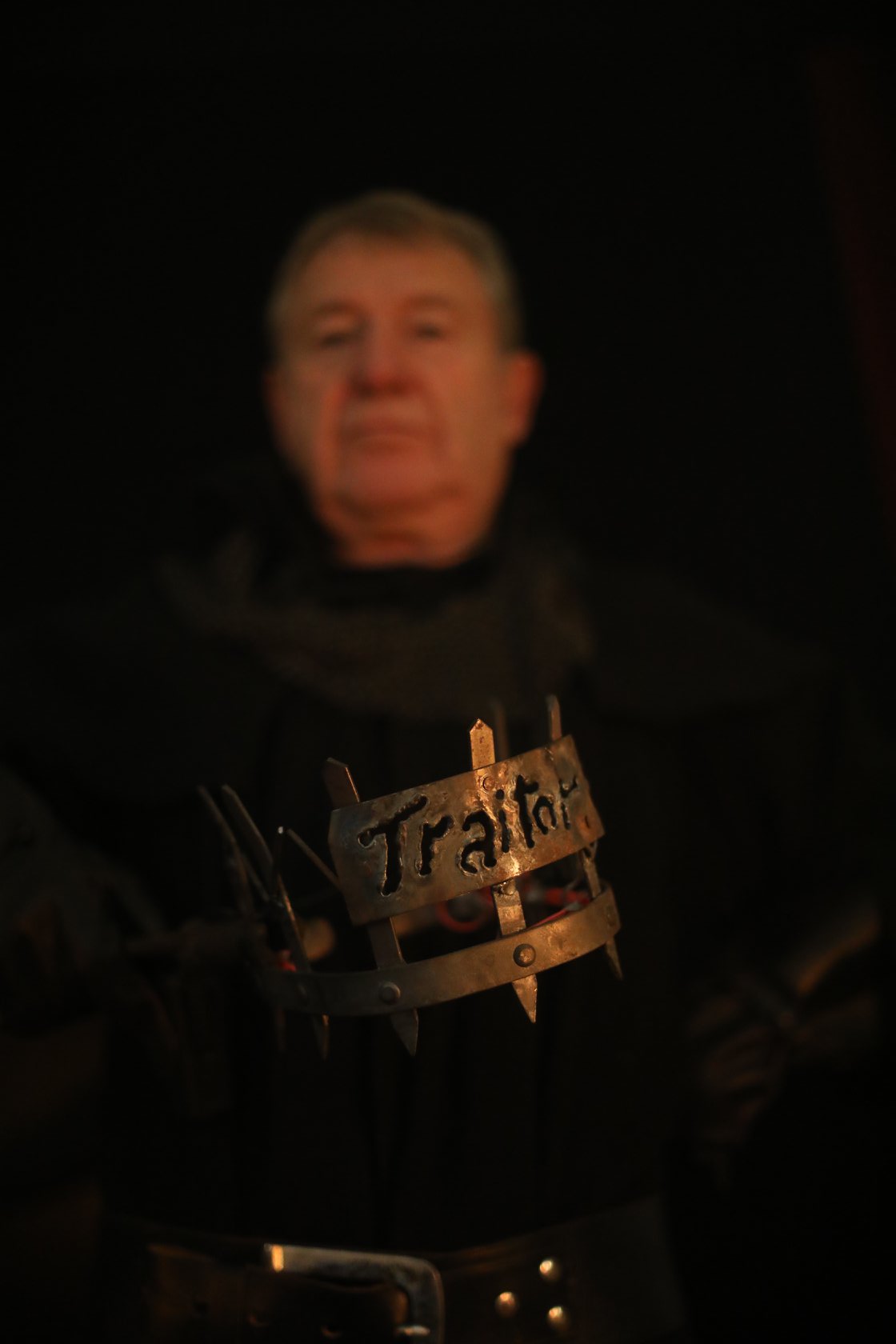 In a dramatic development this morning, the Lord High Constable Depute announced that Walter, earl of Atholl, our late beloved King James’s only living uncle, had been arrested on suspicion of involvement in the foul conspiracy that led to his murder by the filthy traitor, Robert Graham, and his wicked cronies. A body of knights led by the late king’s loyal and well-beloved friend William, earl of Angus, arrived before the gates of Methven at sunrise this morning and demanded entry. Still clad only in his nightgown, the elderly Earl Walter was bound onto his horse and led away under armed guard before the astonished eyes of his household. His whereabouts is currently unknown, but it is believed that he is being taken to Edinburgh by Earl William for questioning in the greater security of the castle there.
In what was clearly a pre-prepared statement, read by his council, Earl Walter has issued a strong denial of the charge against him. He says the fact that he was with the king and queen the night of the attack on them and was seen by many witnesses leaving with his escort to return to Methven, and that he was abed when the messengers arrived with news of the king’s slaying, is clear proof of his innocence from involvement. He had heard a rumour of the plot from is grandson, Robert Stewart, who remains in custody on suspicion of treasonable involvement in aiding and abetting the criminal gang to enter the King’s House but had sternly warned him to keep clear of such wicked men. That his grandson might have got himself embroiled by Robert Graham’s wiles was no sign that Earl Walter was likewise involved. He was prepared to swear to his innocence on oath and before a panel of his peers.
We understand from reports by an unnamed source that Robert Stewart, who has been held in straight custody since the morning of the murder, has made a full confession of his crimes. While this may have been extracted under torture, he has allegedly divulged the full list of the leaders of the conspiracy, detailing how and where they met and what were their ultimate aims. He has, it is reported, revealed that the original plan had been to kill both the king and the queen, seize the young prince in Edinburgh, and give the Lieutenancy to Earl Walter. He confirmed, as we have long suspected, that Earl Walter had been the guiding hand behind the plot and that Walter had planned that the young King James, second of his name, would be the last of that line. Not content with killing the father, Earl Walter planned the death of the son. Such evil is almost unimaginable, but as we have long said, the Earl’s past behaviour reveals a corruption of his soul that knows no limits.
In a later development, Abbot Walter Bower of Inchcolm, who had been in Perth for the council, denounced Earl Walter, revealing that he had been the adviser who had counselled our late lord king to arrest and execute his Albany kinsmen and then slandered him to Graham for that deed. He also commented that it was now believed that Atholl had been the chief instigator in the arrest and suspicious death of the late king’s elder brother, David, duke of Rothesay, thirty-five years ago. Earl Walter is nothing but an evil old snake, he said, wrapping up his wickedness behind the mask of a kindly old man. He deserves everything that’s coming his way.
There seems now to be only one course open to the queen and her lords. Earl Walter must die. She has won the backing of Archibald, earl of Douglas, the late king’s cousin, whom we all urge to be given the Lieutenancy of the kingdom while the young King James is still a child. With his aid, she must root out this evil that has festered at the heart of this realm for too long. God rest the soul of King James. Long live the king!