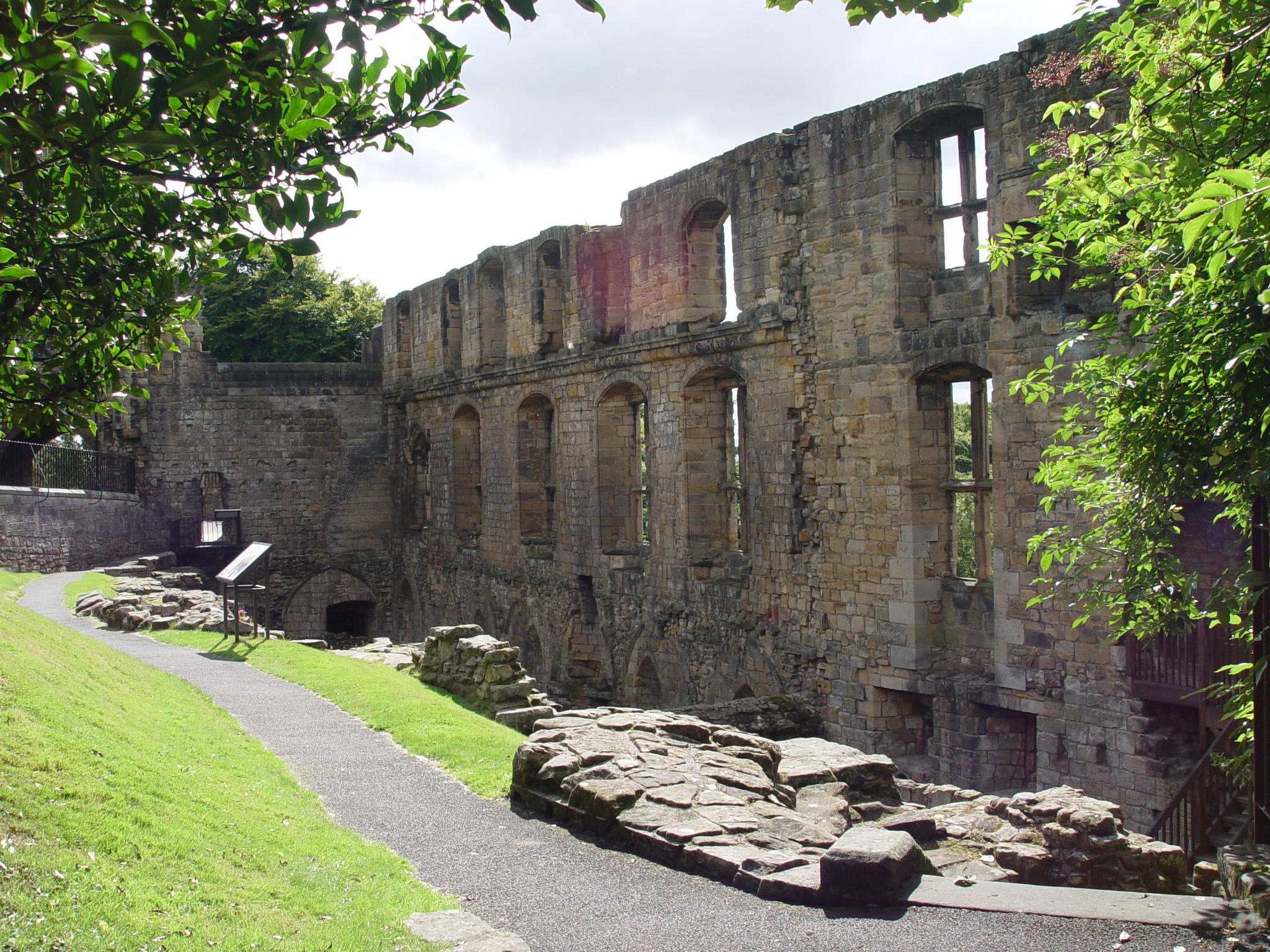 To the south-west of the abbey at Dunfermline and connected to its refectory block by the inner gate tower rises a long, tall building that stands on the brink of the gorge of the Pittencrieff Burn. Few visitors pay it much attention, for what remains is principally its southern wall and the roofless remains of the range of once-vaulted cellars that formed its basement. It rewards far greater attention, however, for this gutted shell of a building is the chief remnant of what was once one of Scotland’s greatest royal palaces and the likely birthplace of King James I.

There was a royal residence at Dunfermline since at least the eleventh century, when James’s ancestors Máel Coluim mac Donnchada (Malcolm III) and St Margaret lived there. The exact location of the royal hall and chambers described by St Margaret’s biographer, Turgot, is unknown but is likely to have been close to the church of the Holy Trinity that formed the basis of the Benedictine monastery that they founded in the 1080s. The small group of monks sent there from Canterbury grew in the twelfth century into one of the greatest monastic communities in the kingdom, thriving on royal patronage.

It is uncertain exactly when it happened, but by the fourteenth century it appears that the royal palace and the abbey had fused, with the monastic guesthouse being developed on a grand scale as the principal residential block of a splendid new complex of buildings south and west of the abbey church and cloister. In its fullest late sixteenth- and seventeenth-century form, the palace formed a roughly triangular arrangement around a central courtyard. At its northern apex, directly opposite the towered west front of the abbey church, was a great gatehouse building, originally the outer gate of the monastic precinct but massively redeveloped in the sixteenth century into a showpiece of the palace for King James VI’s wife, Anne of Denmark. The west range of the cloister formed the east side of the palace and had possibly been taken out of monastic use to meet the accommodation needs of the royal household. The palace’s west range, possibly containing some of its most important rooms, looked out across Pittencrieff Glen, but has been totally destroyed. It was already ruined by the time John Slezer sketched the palace from the west in the late seventeenth-century. 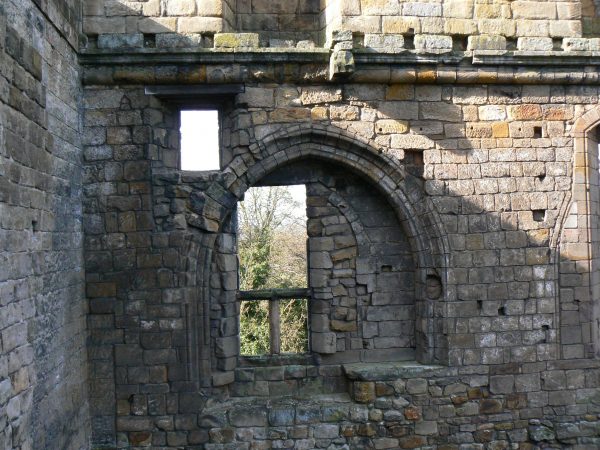 The main survival is the south range, which rises from a terrace cut back at the edge of the gorge’s steep escarpment into the more gently sloping ground to the north. Its basement was semi-subterranean but still formed a high-quality space. In its sixteenth-century form, this basement was divided into a series of barrel-vaulted rooms but the curving scars on the inner face of the south wall and the pillars fossilised in the walls which divide the compartments show that it was originally divided into two splendid spaces. Both rooms had a rib-vaulted roof carried on a row of pillars that ran the length of the building, and both had large, pointed-headed windows to the south to fill them with light and grand hooded fireplaces to heat them. Sadly, these grand fireplaces were damaged by the sixteenth-century alterations. These were living spaces, not merely cellars. Above these rooms was another two grand spaces, apparently a long, high-ceilinged hall to the east and a slightly shorter but equally high chamber to its west. 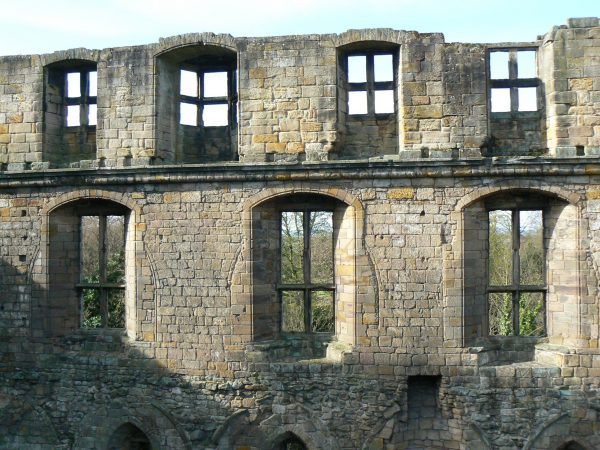 Both rooms had windows in deep, pointed-arched recesses in the south wall that would have bathed the interior with light. Only the easternmost of these survives in anything like its original form, the large rectangular windows that fill the wall being part of the later modifications of the range for James VI and Anne of Denmark. The western hall may have been intended as the abbey guest hall and was connected at its east end to the great monastic kitchen that also served the monks’ refectory. Before the end of the fourteenth century, however, it seems to have become one of the main rooms of the Stewarts’ royal palace. It is uncertain if the fourteenth-century building had a further floor above the hall and chamber, the range of fine oriels that survives there belonging to the sixteenth-century expansion of the palace. 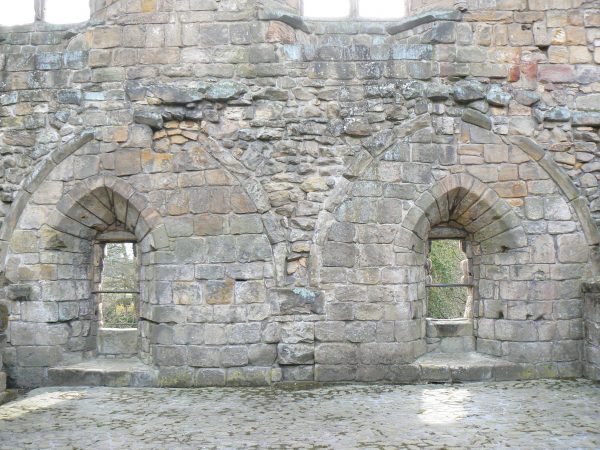 It is not known exactly when James was born but his mother, Annabella Drummond, wrote to King Richard II of England on 1 August 1394 and in her letter spoke of the recent birth of her younger son. Despite all of the other information about James’s life in his Scotichronicon, Abbot Walter Bower failed to mention the king’s birthday. All we can say is that probably in late July 1394, he was born in the royal quarters at Dunfermline. We can say with some confidence that the room in which he was born was perhaps that first-floor chamber west of the hall in the south range, which would have been the principal living- and sleeping-space of the royal residents in the fourteenth century. 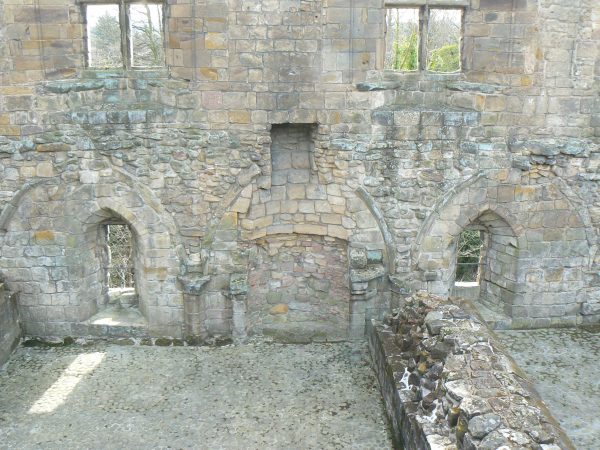 Dunfermline Palace ruins are in the care of Historic Environment Scotland and are entered through the visitor centre in the gatehouse building, although the exterior can also be viewed from Pittencrieff Park. For opening times and admission prices, see https://www.historicenvironment.scot/visit-a-place/places/dunfermline-abbey-and-palace/prices-and-opening-times/