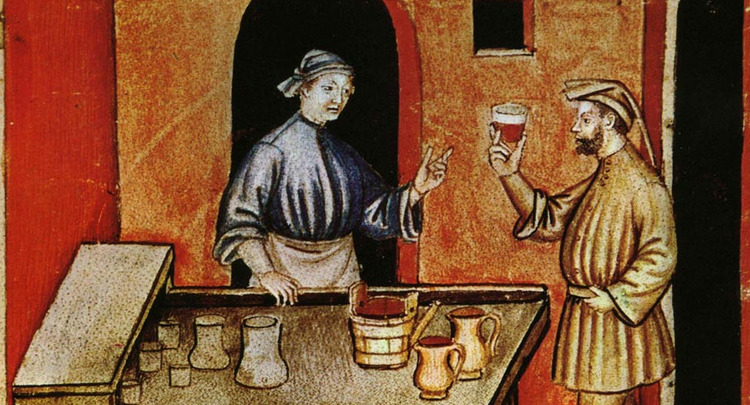 Along with the consumption of food in the great ceremonial feasts staged for King James and Queen Joan, imported wine was drunk in prodigious quantities by the ‘top-table’ guests, while the less distinguished diners received ale that was brewed daily in the brewhouses that always formed part of the service provision attached to any great household. Because ale was ‘home-brew’, it does not occur in the financial records of James’s reign, which covered expenses for commodities bought outside the royal establishment. Interestingly, however, it also does not include the better-quality imported brews for which Germany and the Low Countries were already beginning to win a reputation, the first imported Hamburg ale being purchased for the coronation festivities of King James II early in 1437. The financial accounts from James I’s reign instead show regular and very substantial payments made to merchants for a range of German, French and possibly Spanish wines of different qualities, bought ‘for the king’s use’.

Some of the first purchases relate to James and Joan’s 1425 stay in Perth. The burgh custumars, John Chambers and John Spens, submitted their accounts in Exchequer at Edinburgh for the year 12 May 1425 to 19 April 1426. Included in their figures was an allowance of £8 4s 1½d for a part payment of a total of £11 owed by the king to Thomas Currour, burgess of Perth, for ‘one bote of Osaye wine’. A bote was a butt – the source of the term butler – which amounted to 126 gallons. Osaye wine was the general label for wine from Alsace and was, like modern Alsace wines, a sweet white. At the same audit, the treasurer’s clerk Robert Linton gave his accounts for the year, which included payment of £145 7s 7d for unspecified quantities of iron, wine, salt, almonds and sugar bought for the king’s use. A further £3 10s was accounted for in the same audit for one ‘pipe’ of wine, bought for the king’s use ‘from a sailor called Andrew Baxtar’. A pipe is also the equivalent of 126 gallons of wine! These first purchases indicate that the king’s inner household and guests consumed at least 252 gallons of wine, plus however much was included within Linton’s accounts.

Much of the wine encountered in the records for the early years of the reign was sweet white. In the 1427-1428 exchequer accounts of the custumars of Edinburgh, submitted to the audit at Dundee in May 1428, payment was noted of £12 made to John Dow, for one ‘vase of Rhenish wine’ bought for the king’s use. Like Osaye, Rhenish was general white (it could be rosé) and sweet. At the same audit, the custumars of Linlithgow accounted for £9 10s for a further butt of Rhenish, bought from Robert Man and delivered to Master David Broun, comptroller of the king’s household. James bought a lot of it. The 1433-4 accounts from Perth reveal the purchase of a cauda of Rhenish in the burgh for £8 8s and a further 10s for its carriage down to Stirling. In the same account, a receipt for a payment of £8 was also submitted for a second cauda of Rhenish – described as containing 23 measures – which James purchased and ordered to be delivered to the prior of the Carthusians. The Carthusians seem to have enjoyed sweet wine, for that same accounting year saw James purchase a butt of Muscatel, the then choicest of sweet wines, for the princely sum of £13. In 1435, a 15½ gallon vase of Rhenish was bought for £8 7s 6d. Some of this wine was bought close to source, presumably cutting out the costs of the Scottish merchants who acted as middlemen, as in 1435 when the king’s agent Thomas Lauder, burgess of Edinburgh, paid £20 for wine at Dordrecht in the county of Holland.

The custumars of Cupar submitted accounts for the 1429-30 exchequer year to the audit at Perth in March 1430. In their receipts, they included payment of £16 for two butts of garnach (Grenache) from Robert Sticklaw and delivered to the comptroller for the king’s use. This is the earliest explicit reference to the purchase of red wine for the royal household, probably being true Castilian garnacha or perhaps southern Rhône Valley grenache. In 1435, a further vase or jar of Grenache, bought at a cost for £13 for James’s use, is recorded as ‘burst and destroyed’ in the hold of the ship transporting it from Flanders when ‘the great bombard’ was being loaded.

Some red wine was significantly cheaper than the sweet whites, especially some Gascon or red Bordeaux. The Aberdeen exchequer accounts for 1433-4 included £18 11s 3½d paid for nine pipes of Gascon wine, less than a sixth the cost of an equivalent volume of Muscatel. In 1434, however, possibly on account of a poor harvest the previous year but possibly simply a better-quality wine, a single pipe of Gascon bought in Edinburgh for the king’s use from John of Bigholme cost £8, while a second barrel bought from David Dun the same year cost £16. A final purchase of five pipes of Bordeaux at Edinburgh that year cost £46 13s 4d, At the same time, a pipe of fine Burgundian Beaune was purchased, also for £16.

So, we see mainly German white wines and red Burgundies purchased in the Netherlands, while French reds, mainly clarets from Bordeaux, were obtained through La Rochelle, but generally bought in Scotland from merchants spread around the country from Edinburgh to Elgin at need. Spanish red was also popular with the household, again obtained from Scottish importers rather than at source. We can assume, too, that more exotic wines were perhaps bought in smaller quantities amongst the many general labels of ‘wine’ covering purchases throughout the reign, as perhaps revealed by the three butts of Greek wine bought for £30 in 1437, for the coronation festivities of James II.

Whole butts of wine were bulky to transport and, in Scotland, were unlikely to have been moved far from the ports at which they arrived, unless they could be transported further by water. The vast wine cellars at Linlithgow Palace would once have been lined with wine-butts, carted up from Blackness, but shipment on to inland residences meant decanting into smaller barrels. The custumar of Linlithgow’s accounts in 1431, for example, record payment for transportation of two barrels and one cauda of wine from the burgh’s port at Blackness to Doune Castle, while the carriage of Rhenish from Perth to Stirling mentioned above was probably in smaller casks to make handling easier.

None of the wines, perhaps with the exception of the Muscatel, would have had the alcoholic strength of modern vintages. That is probably just as well, given the volumes of drink that James and his leading courtiers were consuming in a year! Consumption of wine, however, was an important aspect of elite culture and had for centuries before been a key token used to signify engagement with the perceptively superior culture and society of western mainland Europe. The Scottish love-affair with sweet German white wine long pre-dated the first arrival of Liebfraumilch on our off-licence shelves in the late 1960s. French red – claret – was to be the enduring symbol of Scotland’s centuries old alliance with France, which survived even the rift of the Reformation and the Union with England in 1707. As James’s wine-bill shows, Scotland already had been ‘knee-deep in claret’ by the fifteenth century. 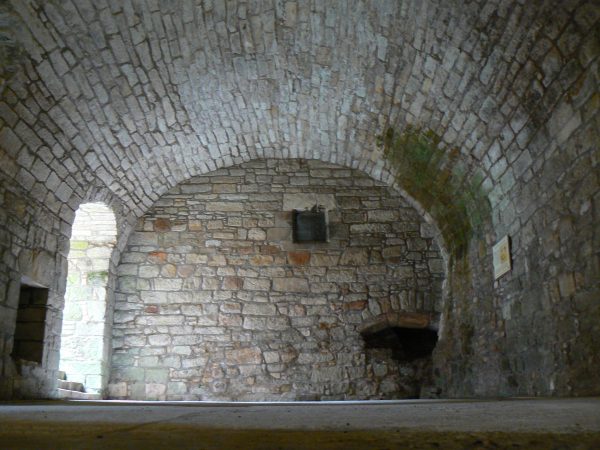