A True Representation? Depictions and Portrayals of James – Who Ate All The Pies? 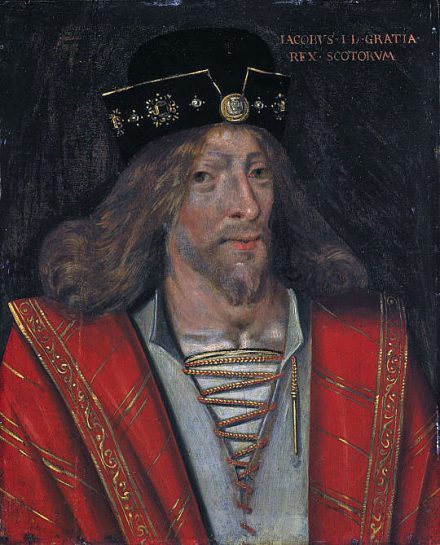 A True Representation? Depictions and Portrayals of James.

Who Ate All the Pies?

Amongst the very many things that we do not know about King James I is his actual physical appearance. Apart from the stylised kingly head on his coins and the equally stylised enthroned royal figure from his great seal, his earliest surviving portrait representation is in the mural fresco by the Perugia-born artist Bernardino di Betto, better-known as Pinturrichio (1454-1513) painted in the library attached to the cathedral in Sienna built for Eneo Silvio Piccolomini (Pope Pius II) between 1502 and 1507. Pinturrichio never saw his subject and, like the Classical detail of James’s palace and the Italianate landscape in which it is set, the portrayal is utterly fanciful and bears little resemblance even to the word-picture of the king left to us by Piccolomini himself.

Most people have an idea of James based on the portrait by an unknown artist which heads this post. It, however, dates from perhaps a century after James’s death and is the earliest surviving intentional portrait representation of him. Most of the many portrait engravings, drawings and other paintings of him that exist are based on this one image. We do not know who the model was – it may have been based on a lost earlier work – but the facial similarities with the oldest surviving representations of his son and grandson, produced in the third quarter of the fifteenth century, suggest that the artist was perhaps basing his study on one of those paintings. How accurate it is we can never know, but it is certainly more probably closer to a likeness than the Pinturrichio fresco.

Our most detailed description of James comes from the lengthy pen-portrait of the king written by Abbot Walter Bower in the decade after his assassination. Bower, who had been closely involved in James’s administration and had met with him frequently, can be trusted in his detail, which is not high-flown and flattering.

The king was of medium height, a little on the short side, with a well-proportioned body and large bones, strong-limbed and unbelievably active, so that he […] would challenge any one of his magnates of any size to wrestle with him.

This was the active, energetic ‘young man in a great hurry’ James of the 1420s, fresh from recent experience of military campaigns in France and returning to Scotland in a whirlwind of activity to sweep away the Albany Stewarts and impose his mastery over his kingdom. Piccolomini leaves us with a quite different image, describing his same stocky height but labelling him as ‘burdened with much corpulence’. The fit and active young thirty-something of the 1420s had gone to seed by the mid-1430s – too much lamprey pie, marzipan fancies and sweet white wine, perhaps. Nevertheless, he was still fit enough in 1436 to don his armour and lead his army on campaign to Roxburgh. Perhaps it had been Queen Joan’s teasing that spurred him into action in an attempt to regain his fitness, reflected in his enthusiasm for ‘paume’ (an early form of tennis played with the hand rather than a racquet) in the weeks after the over-indulgence of the Yule-tide feasts in the royal household at Perth? 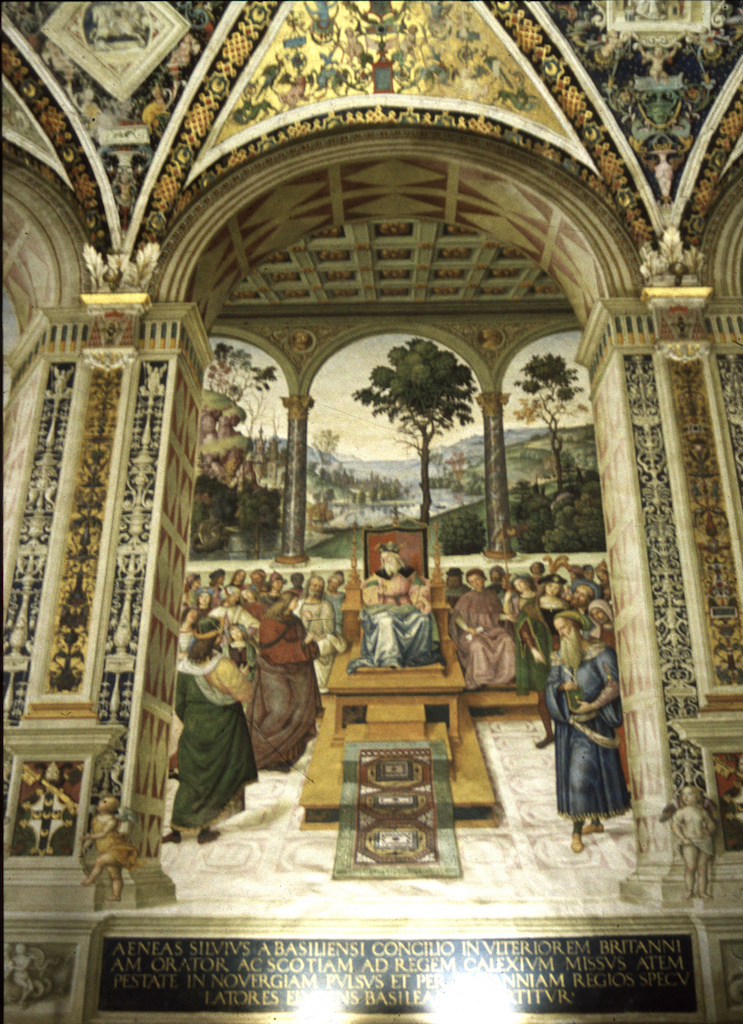 Piccolomini’s other observation about James was his strikingly ‘clear but piercing eyes’, a feature in which he saw reflected the king’s greed and cunning. If the eyes are indeed the ‘window on the soul’, the future pope saw in James’s eyes something deeply unsettling. It is important, too, to remember that in the medieval period it was believed that the physical state of the body mirrored the moral state of the spirit within. Just as physical diseases such as leprosy or plague reflected the corruption of the soul, so deformation of the body revealed some spiritual distortion. For Piccolomini, it was the king’s un-redeeming features that were represented in his eyes and his gross fatness, his vindictiveness, his deviousness and, above all, his hunger for wealth and power.

So, can we come closer to a visual image of James than his sixteenth-century portrait offers? We can certainly discard almost every feature of it, from the long hair and trimmed beard that became fashionable again later in the sixteenth and earlier seventeenth centuries, to the earlier sixteenth-century clothing. As James and Joan’s purchases of fine cloth for their robes demonstrates, they were dedicated followers of European fashion and, coming fresh from one of the most sophisticated courts in Europe and his recent trips to the centre of contemporary European style in France, we can be sure that James would have been up-to-the-moment in his appearance. 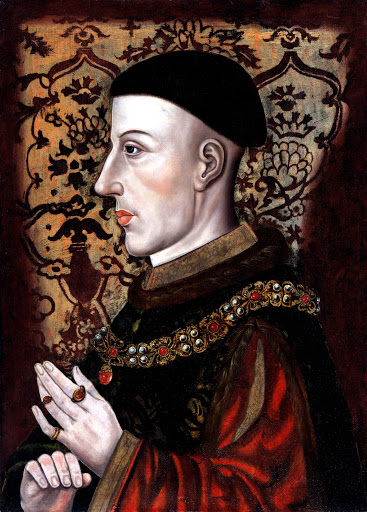 The famous portrait of Henry V of England, clean-shaven and with his bowl-cut hair and shaved-back-and-sides, perhaps gives us a better impression of how James would have appeared soon after his return from England. This short-hair fashion and preference for no facial hair had emerged in the 1410s, finally displacing the longer hair styles and styled beards of the later thirteenth and fourteenth centuries. Short cut and no beard or moustache remained male hair fashion for the western European elite into the early 16th century – James IV was noteworthy in the 1490s for his long hair and beard – and, while facial hair came back into fashion as the sixteenth century progressed, it was in the seventeenth century that hair-styles lengthened and beards briefly again became the adult male norm for royalty and aristocracy.