A Battlefield for Power on the Scottish Border: Melrose Abbey 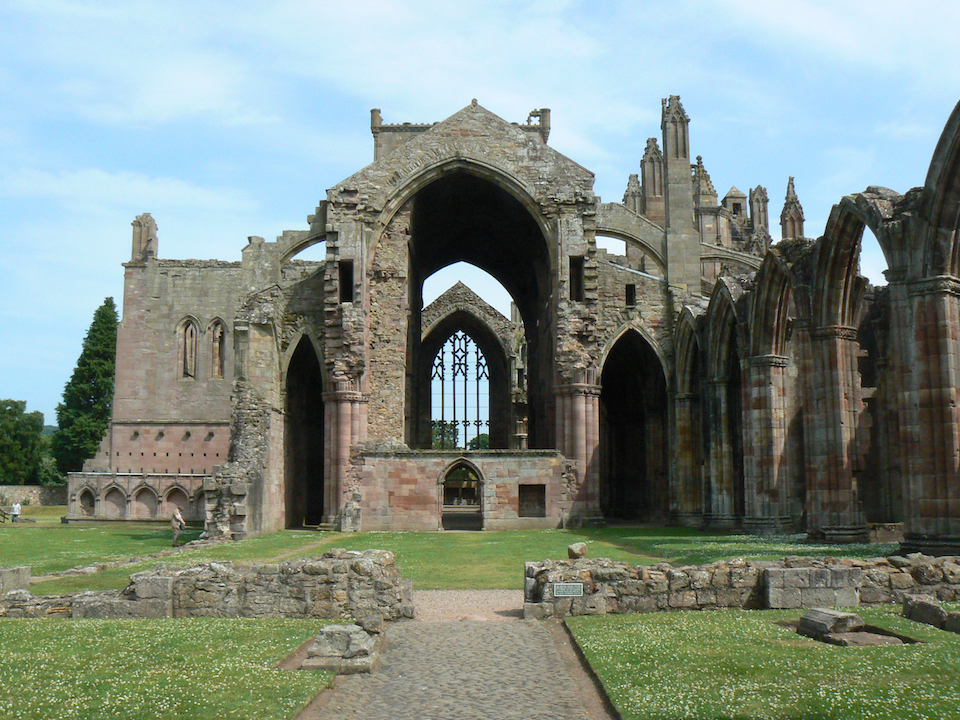 A Battlefield for Power on the Scottish Border: Melrose Abbey.

James and Joan’s first hours in Scotland were spent within the precinct at Melrose Abbey. The oldest monastery of Cistercian monks in Scotland, founded in 1136 by James’s ancestor, King David I, it was one of the richest and most extensive landowners in southern Scotland. Indeed, the wealth of Melrose and other major monasteries throughout Scotland upon which David had lavished land, jurisdictional rights and other properties from the crown’s resources, allegedly prompted James to comment later that his ancestor had been ‘ane sair sanct for the croun’ (a painful saint at the crown’s expense). In 1424, however, much of the broad array of resources available to Melrose’s monks was being diverted towards paying for a major rebuilding programme at the abbey, replacing the church and other buildings that had been sacked and burned by an English army in 1385.

Melrose’s burning by Richard II’s invading army had been part of a systematic campaign that saw the monasteries at Dryburgh, Newbattle and Holyrood also burned as the English marched north along Dere Street to Edinburgh. On the one hand, this targeting might seem like a gratuitous piece of cultural vandalism, but on the other there was clear purpose behind it, for the English king was attacking centres of what he and his people saw as schismatics, supporters of an Anti-Pope who had torn apart the unity of the Christian Church. Since 1379, Europe had been split into two rival religious camps, one supporting the ‘Roman’ pope, Urban VI (elected in 1378) and the other supporting the ‘Avignonese’ pope, Clement III (elected in 1379). This division in the Church is referred to as The Great Schism. Clement had French support, which meant that England automatically supported Urban. Obviously, to make a political and diplomatic point, the Scots aligned with the French as backers of Clement. Richard’s invasion, then, occurring when the conflict between the opposing supporters of these rival popes was at its height, saw a concerted effort to destroy the chief centres of support for Clement in Scotland. 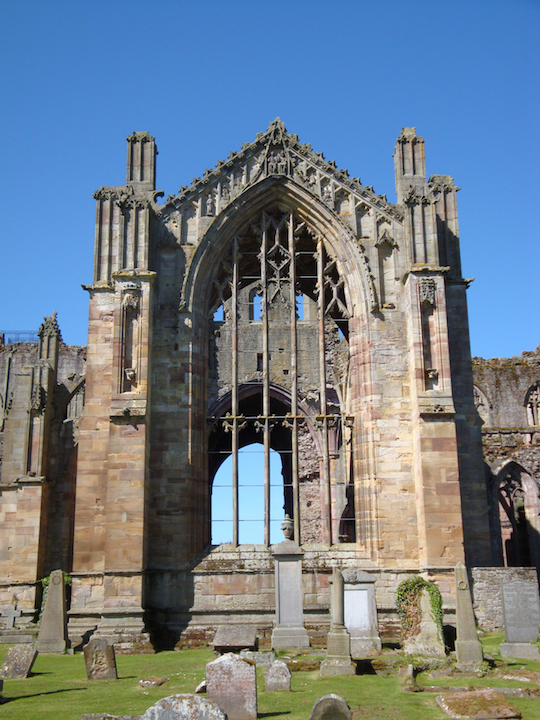 Melrose in 1385 had been one of the largest monasteries in Scotland, with a great twelfth-century church and cloister complex that contained the shrine of St Waltheof (who had been the second abbot of Melrose and the stepson of King David I), the tombs of King Alexander II (d.1249) and a host of the greater nobility of southern Scotland including William, 1st earl of Douglas, and of huge national importance, was the burial-place of the heart of King Robert I, where it had been interred after it was brought back from Sir James Douglas’s ill-fated crusading expedition against the Moors in southern Spain. These burials gave the abbey a symbolic importance in the spiritual, political and cultural life of the kingdom that demanded that it should be rebuilt on a grander scale after the 1385 disaster.

Richard II started the rebuilding, allocating thousands of pounds – millions in modern terms – from the customs duty collected on the trade in wool through the important markets in Berwick and Roxburgh. It was English masons, too, who seem to have first overseen the project, for the magnificent church which is today the best-preserved portion of the abbey’s ruins is strongly English in its architectural style, whereas most Scottish architecture of the late fourteenth and fifteenth centuries drew its influences from France and the Low Countries. The church is a masterpiece of late Gothic, richly decorated and elaborately planned, constructed on a monumental scale. Indeed, so ambitious was its plan that the western end of the nave of the church does not seem to have been finished 140 years after James and Joan visited the abbey and the Reformation swept away the old religious order and abbeys with it. 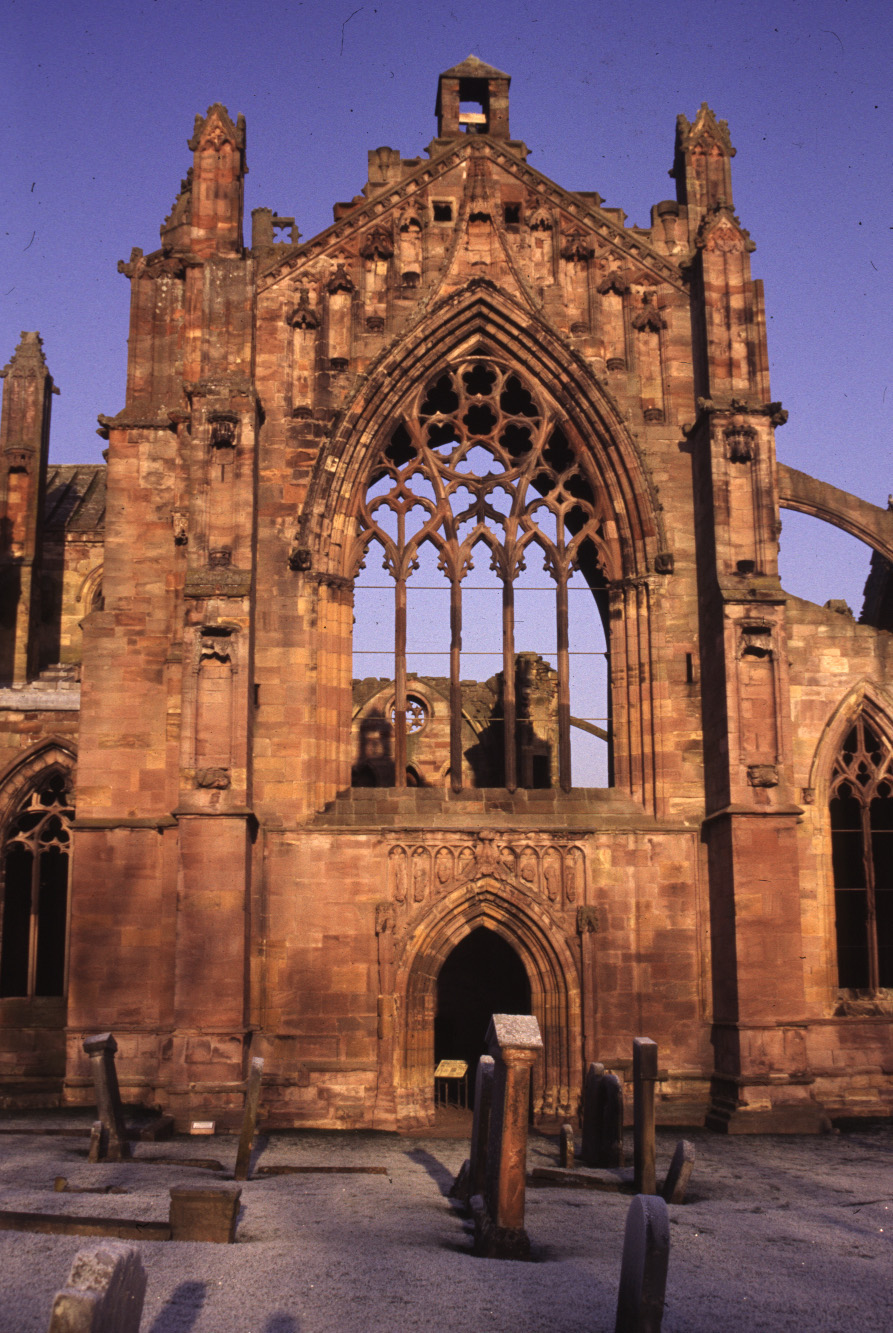 In Melrose, James was also immediately confronted with the reality of one of the greatest political challenges that faced him on his return to Scotland. Melrose was a royal abbey, founded by his ancestor and patronised by successive kings of Scots right down to his father’s reign. In 1424, however, the monks of Melrose looked not to the crown for protection but to the Earls of Douglas, who were the most powerful nobles in the south of Scotland and had taken for themselves a role as guardians of the Border and protectors of the Church. The sack of Melrose in 1385 had been a swipe by Richard II at that position, but the Douglases had maintained and extended their influence over the community, signalling the strength of their ties to the abbey through the burial there of the 2nd earl, James, after his death in the battle of Otterburn in 1388. James was determined to end this Douglas usurpation of the position of the crown as chief patrons and protectors of not just Melrose, but the Scottish church more generally. That, though, was not happen immediately – he had more pressing political business on his agenda in 1424 – but once he was secure on his throne, had destroyed the Albany Stewarts and humbled the Black Douglases, he returned to Melrose and forged a new, deep and personal relationship with its abbot, John Fogo (1425-34), who became his personal confessor and a strong political ally in parliament. Together, king and abbot restored Melrose to its position as the pre-eminent royal monastery in the Scottish Borders.

The ruins of Melrose Abbey today are in the guardianship of Historic Environment Scotland. Details of access and admission charges can be found at https://www.historicenvironment.scot/visit-a-place/places/melrose-abbey/prices-and-opening-times/